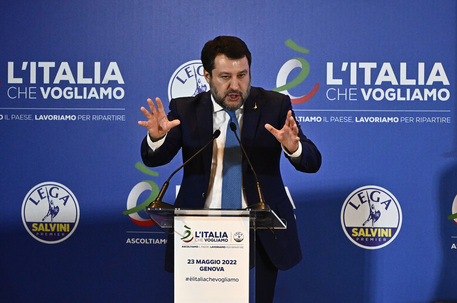 (ANSA) - ROME, MAY 24 - Tension within the broad coalition supporting Premier Mario Draghi's government is high at the moment over the reforms Italy has pledged to deliver in exchange for almost 200 billion euros of grants and low-interest loans from the European Union for its post-COVID National Recovery and Resilience Plan (NRRP).
The government must pass 45 of the measures it promised by the end of June and tension is especially high about competition reforms and, in particular, the liberalization of the concessions for Italy's beach establishments.
The EU says the contracts to run lucrative beach bars and restaurants that rent out sun loungers and offer other facilities should be put out for tender rather than automatically rolled over to the existing holder.
Establishments like these occupy most of the best parts of Italy's shoreline.
The Commission has said this system has hampered competition and meant the State has gained little in terms of revenue from a precious public resource that has been put into private hands.
The government has said tenders will be used to allocate the concessions by the end of 2023, but Silvio Berlusconi's centre-right Forza Italia and the right-wing League are calling for this to be postponed.
They also want people who lose their concessions to be get compensation.
Sources on Tuesday said the government has proposed a compromise in which the tenders for concessions in which there is a legal dispute or there are other problems drafting the tender can be delayed until the end of 2024 at the latest.
On Monday centre-left Democratic Party leader Enrico Letta said the opposition which League leader Matteo Salvini was presenting to the government's own measures had "gone beyond the limit.
"Salvini is endangering the NRRP money," Letta added.
"This is not compatible with effective, positive action by the government".
Salvini hit back by accusing the PD of staging "tantrums" by calling for 'ius soli' legislation to give Italian citizenship to the children of migrants who were born and have grown up in Italy and in pushing forward a bill aiming to combat homophobia that the League opposes. (ANSA).