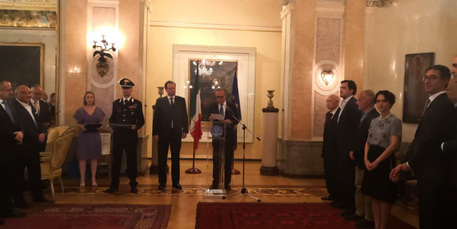 (ANSA) - ROME, MAR 21 - Italian political parties have said in unison that a Russian foreign ministry official who threatened Italy with "irreversible consequences" if it upped sanctions due to the Ukraine war should be stripped of the honorific titles Rome has conferred on him.
Alexei Paramonov, director of the ministry's European department, was named a Knight of the Order of Merit of the Italian Republic in 2018 and a Commander of the Order of the Star of Italy in 2020.
Foreign undersecretary Benedetto Della Vedova of the More Europe party said he would ask Foreign Minister Luigi Di Maio to add Paramonov's name to the list of Russians who are set to have their Italian titles revoked.
The foreign ministry is only responsible for revoking the title of Knight, while the premier's office is responsible for revoking the title of Commander.
The centre-left Democratic Party (PD), the centrist Italia Viva (IV) party and others called for the two honours to be revoked.
Paramonov's threat caused outrage in Italy and was described as "unacceptable" by Premier Mario Draghi. (ANSA).