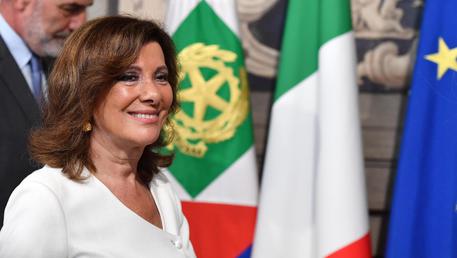 (ANSA) - ROME, JAN 28 - The leaders of Italy's centre-right parties decided that their 'grand electors' should vote for Senate Speaker Elisabetta Casellati in Friday's fifth ballot of the election for a new president.
Casellati, a member of ex-premier Silvio Berlusconi's Forza Italia party, will become Italy's first woman head of State if she is elected.
The move risks upsetting the stability of the broad coalition supporting Premier Mario Draghi's government.
The centre-right Democratic Party (PD), the 5-Star Movement (M5S) and the left-wing LeU group have said the centre right should not get behind a candidate of its own, but instead try to reach an agreement on a consensus figure.
League leader Matteo Salvini called on the leaders of the parties on the ruling coalition to hold a meeting before the fifth ballot, League sources said.
He said pn Facebook it was an "honour" to put Casellati forward as a candidate.
"They messed us about for three days," said PD leader Enrico Letta referring to the centre right, which is made of FI, the League and the opposition right-wing Brothers of Italy (FdI) party.
"They tried to divide us with fanciful ideas".
The PD, M5S and LeU grand electors may snub the vote.
Under the Constitution, the head of State acts as a sort of referee of Italian politics and the role is especially important at times of political crisis.
The centre right has 453 of the 1,009 grand electors - lawmakers from both houses of parliament and regional representatives - who take part in the election of the head of State.
This is a little short of the magic number of 505 needed for the simple majority to elect a new president.
There will be two ballots a day in Italy's presidential election as of Friday, party whips have decided.
There had been only one ballot of lawmakers from both houses of parliament and regional representatives every day between the start of the election on Monday and Thursday.
On Friday, however, there will be a second ballot at 5pm if the first, which started at 11am, is inconclusive. (ANSA).