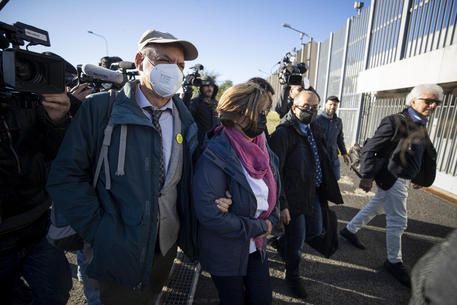 (ANSAmed) - ROME, OCT 27 - The parents of Giulio Regeni, an Italian research student abducted and tortured to death in Egypt in 2016, on Wednesday asked the European Union to help them get truth and justice in the case.
Regeni's mother, Paola, asked the EU for "proximity and help with concrete facts, so the truth is discovered and justice is done for our son".
"Seeking the truth and justice for our son would also mean helping the Egyptian people", said Paola Regeni, who went to the European Parliament on Wednesday with husband Claudio and their attorney, Alessandra Ballerini, to talk about Egypt's disregard for human rights.
"In all these years we have only heard about words and few actions, while single countries proceeded according to their interests. We ask for support through actions as well as words", added Claudio.
"In Egypt the situation is extremely concerning for human rights, and this has been clearly denounced both by the UN and the EU. We have lodged a complaint against the Italian government, for the violation of law 185/90 that bans the sale of arms to countries violating human rights. This is practically not respected by any EU or non-EU nation", added Regeni's father.
While his wife Paola stressed: "Rome prosecutors have an autopsy of over 260 pages on Giulio and this is the biggest testimony we can offer on the lack of respect for human rights".
"Impunity" for the abduction, torture and murder of Giulio Regeni "is intolerable and traumatizing and can't be definitive", said the lawyer of the Regeni family to the European Parliament, recalling that a court decided not to proceed in the absence of defendants, urging to obtain an address for the four Egyptian security officers who are suspects.
The first hearing in the trial in absentia of the four Egyptian security agents took place in Rome on October 14, when a Court of Assizes judge ruled it could not proceed until the defendants received notice of being on trial, sending the case back to a preliminary hearings judge.
Regeni was found dead in a ditch on the Cairo-Alexandria highway on February 3, 2016, a week after disappearing. He had been tortured so badly that his mother said she only recognised him by the tip of his nose.
He had been fingered as a spy by the head of Cairo street sellers' unions, the politically sensitive issue that was the subject of his doctoral research for Cambridge University.
"As was also written in the decision of the Assize Court - stressed attorney Ballerini - there is no collaboration from Egypt. There can be no confidence towards a regime that promises and then acts in a completely different way".
The ruling in the Assize Court is a "setback but it cannot be definitive", continued the lawyer.
"We ask the EU ambassadors, European institutions and the European Parliament to exercise the utmost pressure at every single meeting with Egyptian authorities to obtain an address for the four defendants" where judicial communications can be sent and that this be "subordinated to any business. No business deal can hold in front of the impunity of those abducting, torturing and killing".
The Regenis have condemned continued Italian arms sales to Egypt including two frigates. (ANSAmed).