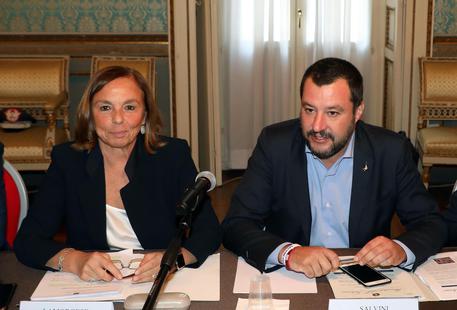 (ANSA) - ROME, AUG 25 - League leader Matteo Salvini has asked Premier Mario Draghi for a three-way meeting also featuring Interior Minister Luciana Lamorgese, of whom the nationalist leader has been sharply critical recently over increased migrant arrivals and the alleged lack of policing of a massive rave party straddling the borders of Lazio and Tuscany, among other things.
"If a minister is competent they should show it, if they have a will they should show it, otherwise they should leave their post for someone else," Salvini said at the annual meetig of the influential Catholic activist group Comunione e Liberazione (CL).
Migrant flows to Italy have been sharply up this year compared to last and a hotspot on the stepping stone island of Lampedusa is overflowing, with more than twice its capacity being filled.
The huge illegal rave party that brought young people from across Europe to a country site straddling Lazio and Tuscany was broken up last Thursday leaving piles of waste, at least four alcohol-induced comas and one drowning death in its week-long trail, plus a political furore as rightwingers like Salvini and fellow nationalist Giorgia Meloni of Brothers of Italy (FdI) attacked the interior minister over the alleged lack of policing of the event.
On another issue, a call for the resignation of Economy Undersecretary Claudio Durigon to quit or be sacked after the nationalist League MP called for a park in his home city, Latina, to be renamed after Arnaldo Mussolini, the brother of Fascist dictator Benito Mussolini, Salvini appeared to open to the possibility, saying it might be discussed, after previously defending the official at all costs.
The park in the city founded by Mussolini after he drained the Pontine Marshes is currently named after Giovanni Falcone and Paolo Borsellino, two anti-mafia prosecuting magistrates who were murdered by Cosa Nostra in 1992.
Ex-European Parliament president Antonio Tajani, No.2 in ex-premier Silvio Berlusconi's centre-right Forza Italia (FI) party, said "we aren't asking for anyone to resign and at this difficult moment it is useless to waste time on internal political battles".
Asked about the renewed calls for Durigon to go, Tajani said "this government must put the national interest before partial interests".
Ettore Rosato of the centrist Italia Viva (IV) party said he did not think there would be a government crisis over Durigon.
Anti-establishment 5-Star Movement (M5S) MP Mario Perantoni said the M5S would file a no-confidence motion in Durigon unless he quit.
Centre-left Democratic Party (PD) leader Enrico Letta on Tuesday reiterated a call for Economy Undersecretary Claudio Durigon to quit or be sacked.
Answering a question on whether Durigon should resign, Letta replied "Yes. Apology of Fascism is incompatible with the Constitution and our government. I believe the affair must be resolved".
Letta attacked Salvini and Meloni for their allegedly extremist stances saying "Berlusconi was a bed of rose compared to them".
Meanwhile Mattia Santori, of the Sardines movement that rose up in Emilia-Romagna against the League and the spread nationally, announced that he would stand for the PD in Bologna.
He said another four or five Sardines would follow him. (ANSA).