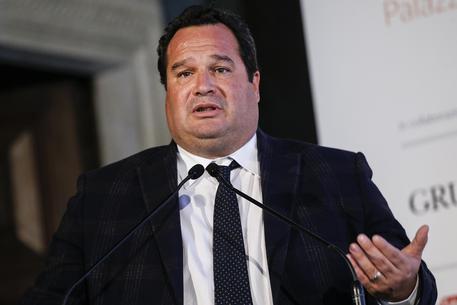 (ANSA) - RIMINI, AUG 24 - Centre-left Democratic Party (PD) leader Enrico Letta on Tuesday reiterated a call for Economy Undersecretary Claudio Durigon to quit or be sacked after the nationalist League MP called for a park in his home city, Latina, to be renamed after Arnaldo Mussolini, the brother of Fascist dictator Benito Mussolini.
Answering a question on whether Durigon should resign, Letta replied "Yes. Apology of Fascism is incompatible with the Constitution and our government. I believe the affair must be resolved".
The park in the city founded by Mussolini after he drained the Pontine Marshes is currently named after Giovanni Falcone and Paolo Borsellino, two anti-mafia prosecuting magistrates who were murdered by Cosa Nostra in 1992.
League leader Matteo Salvini said Tuesday that Durigon "has my utmost confidence".
He recalled that the Latina-born MP had been the "father" of the 'quota 100' early-retirement pension reform, a key League policy move.
Ex-European Parliament president Antonio Tajani, No.2 in ex-premier Silvio Berlusconi's centre-right Forza Italia (FI) party, said "we aren't asking for anyone to resign and at this difficult moment it is useless to waste time on internal political battles".
Asked about the renewed calls for Durigon to go, Tajani said "this government must put the national interest before partial interests".
Ettore Rosato of the centrist Italia Viva (IV) party said he did not think there would be a government crisis over Durigon.
Anti-establishment 5-Star Movement (M5S) MP Mario Perantoni said the M5S would file a no-confidence motion in Durigon unless he quit. (ANSA).