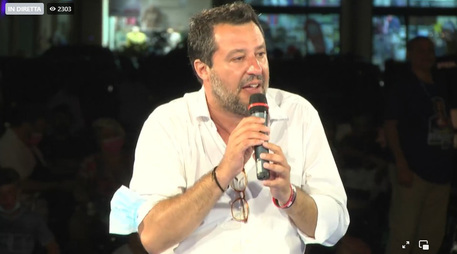 (ANSA) - ROME, AUG 2 - League leader Matteo Salvini has said that his support for Premier Mario Draghi's government is at risk due to the recent wave of migrant-boat arrivals from North Africa.
"I have written to Draghi and told him that the problem of the (migrant) landings must be resolved by the end of August," Salvini said on Sunday.
"If the minister (of the Interior Luciana Lamorgese) is not able to solve, it should be recognised and the necessary action taken.
"Something should be done to stop these arrivals.
"It would be a problem for us in the League to support a government that accepts this number of landings".
Salvini took a tough stance on asylum seekers when he was interior minister in ex-premier Giuseppe Conte's first government from June 2018 until September 2019.
He implemented a controversial policy of refusing access to Italy's ports to NGO-run migrant-rescue ships.
The League would not be able to pull down Draghi's government by withdrawing its support on its own. (ANSA).