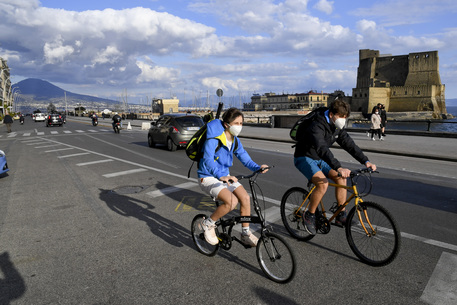 (ANSA) - ROME, APR 16 - Premier Mario Draghi announced Friday that the government is to start significantly relaxing Italy's COVID-19-linked restrictions as of April 26.
He said the government had taken a calculated risk that was "based on (contagion) data that is improving".
The government is reintroducing moderate-risk yellow zones to the nation's tiered system of restrictions, but in a 'reinforced version' which means restaurants will be able to serve people at outdoor tables and concerts and sports events will be able to resume as long as they take place in the open air.
At the moment Italy only has high-risk red zones or medium-high-risk orange zones, where bars and restaurants can only do takeaways or home deliveries.
High-school students will return 100% to having lessons in class on April 26, except in red zones.
At the moment high-school students in red zones are doing lessons via distance learning, along with pupils in the second and third year of middle school.
High-school students in the rest of the country are having 50-75% of lessons physically in school and the rest via distance learning.
"We have brought the introduction of the yellow zone forward to this month, but with a change with respect to the past, giving precedence to open-air activities, restaurants open for lunch and dinner and all schools reopening in yellow and orange zones," Draghi said.
"It is possible to look to the future with prudent optimism and confidence".
He said a ban on movement between Italy's region's would end too.
People will be allowed to move between yellow-zone regions while it will be possible to obtain a pass to move between regions of different colours.
The premier said that he was confident if would not be necessary to tighten the restrictions again if people respect the rules on physical distancing and wearing facemasks. He said the gradual easing of the restrictions was a way to reach out to the groups worst affected by the measures, such as bar, restaurant and gym owners and shopkeepers, who have staged a series of protests in recent weeks.
"These openings are a response to the distress of some sectors and to young people," the premier said.
"They set the base for the recovery of the economy.
"I expect it to bounce back strongly in the coming months and then we will have to get onto a path of growth.
"A rebound is certain.It is not certain how strong it will be.
"We have to work on the challenge of making sure that, after the recovery of the coming months, we continue to grow and keep the level of employment high after so many years in which the situation was different".Culture Minister Dario Franceschini said that, in addition to outdoor shows, cinemas and theatres would be able to open for indoor shows with capacity restrictions.
The plan to ease the restrictions also sees Italy's open-air swimming pools reopen on May 15, while indoor pools and gyms will be able to resume work on June 1, sources said.
A nationwide curfew that kicks in at 10pm is set to stay for the time being though, the sources said.