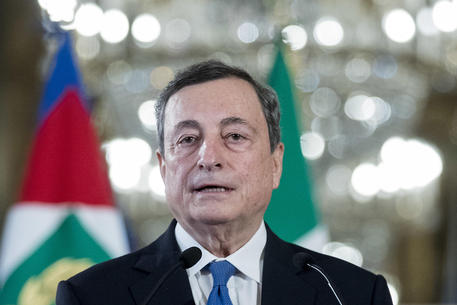 (ANSA) - ROME, FEB 8 - Premier-designate Mario Draghi on Monday starts a new round of consultations with Italy's political parties on the formation of a new broadly-backed government.
President Sergio Mattarella gave the former head of the European Central Bank a mandate to try and form a new government last week after outgoing Premier Giuseppe Conte's executive collapsed.
With Italy battling the COVID-19 pandemic, holding the presidency of the G20 this year and co-chairing the COP-26 UN Climate Summit with the UK, Mattarella called on the parties in parliament to back a government led by non-political figure rather than holding snap elections at such a delicate time.
The first round of talks went well last week, with the right-wing Brothers of Italy (FdI) party the only group to give a flat-out No to Draghi.
Indeed, the consultations almost went too well, with League leader Matteo Salvini dropping his calls for snap elections and saying he was willing to work with an eventual Draghi government.
The prospect of being in the same governing alliances as the right-wing League has caused unease within the centre-left Democratic Party and the left-wing Leu group, both of which were part of the coalition that supported Conte's government.
Even the anti-establishment 5-Star Movement, another part of what was the ruling majority and the biggest group in parliament, has overcome its aversion to a government led by a technocrat.
Conte, who last week said he will not hamper the formation of a Draghi government, has reiterated that he does not intend to be a member of the new cabinet.
Conte is close to the M5S and said the movement is the force that can tip the scales one way or another.
Sources said Draghi is aiming to report back to Mattarella in the next few days to tell him he no longer has any reservations about accepting the mandate to be premier in order for the new government to be sworn in by Friday. (ANSA).