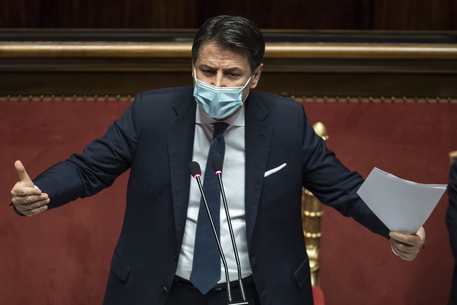 (ANSA) - ROME, JAN 26 - Premier Giuseppe Conte told his cabinet on Tuesday that he has decided to hand his resignation to President Sergio Mattarella, sources said.
The premier is expected to seek a mandate from the head of State to form a new executive with a broader coalition although it is highly uncertain where the crisis will lead. The government no longer had an absolute majority in the Senate after ex-premier Matteo Renzi's Italia Viva (IV) party triggered a crisis in the middle of the COVID-19 pandemic by withdrawing its support.
Attempts to bring in so-called 'responsible' or 'constructor' lawmakers to support the government and make up for the loss of IV have been fruitless so far.
The centre-right opposition is calling for early elections to be held.
The three parties remaining in the government coalition, the 5-Star Movement (M5S), the centre-left Democratic party (PD) and the left-wing LeU group, have expressed staunch support for Conte.
Justice Minister Alfonso Bonafede, Culture Minister Dario Franceschini and Health Minister Roberto Speranza on Tuesday expressed backing for Conte in their respective roles as the lead representatives within the government of the M5S, the PD and LeU group after he told then he was resigning, sources said.
Matteralla, who as president is the referee of Italian politics, is set to call of round of formal consultations with the parties in parliament and other institutional figures before deciding what to do.
The consultations are not expected to start earlier than Wednesday afternoon.
The government survived two confidence votes in parliament last week after IV pulled out but it failed to muster an absolute majority in the Upper House.
Conte may have decided to quit now because the government risked being defeated in a vote in the Senate on a report by Bonafede this week.
If Conte does manage to put together a new government it will be his third.
His first government, which lasted from June 2018 until August 2019, was backed by the M5S and Matteo Salvini's right-wing League party.
Renzi's IV pulled its support over issues that included diferences over the plan on how to spend the over 200 billion euros Italy is set to get from the EU's COVID-19 Recovery Fund.
Renzi had blasted the Recovery Plan as lacking ambition.
IV also complained about the government's failure to take cash from the European Stability Mechanism (ESM) to invest in the national health system, which has been pushed to the limit by the coronavirus emergency.
There has been speculation that IV could come back into the ruling alliance, even though the M5S and the PD had ruled out reopening the door to Renzi's group.
Another possibility is for a new government to be formed under a different premier with the support of Silvio Berlusconi's centre-right Forza Italia (FI) party to make sure the government's COVID-19 Recovery Plan is delivered. (ANSA).