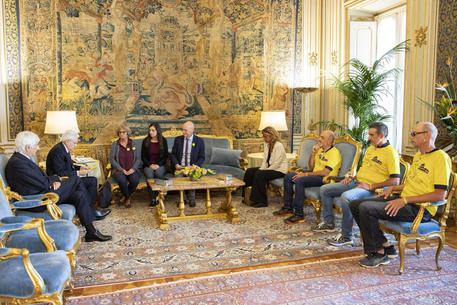 (ANSA) - ROME, JAN 25 - President Sergio Mattarella on Monday demanded a response from Egypt over the torture and murder of Giulio Regeni on the fifth anniversary of the Italian student's disappearance in Cairo.
The Cambridge University research student's brutalized body was found a week later.
Rome prosecutors have requested that four members of Egypt's security services face trial in relation to the case.
"Among many difficulties, the work of the Rome prosecutors' department has led to the conclusion of investigations that have identified a picture of grave responsibility that will soon be subject to a trial for the consequent punishment for the guilty parties," wrote Mattarella in a statement.
"We expect a full and adequate response from the Egyptian authorities, which have been relentlessly called on in this regard by the Italian diplomatic services".
Foreign Minister Luigi Di Maio told his his EU counterparts in Brussels later Monday that Regeni's "barbaric murder is still an open wound in Italy, but I am here today to talk with you because that very same wound is inevitably also European".
"Let it be clear, Italy deems Egypt a crucial interlocutor in the Mediterranean, and deems that our task in Europe is to start a frank, constructive and transparent dialogue with Cairo, but it cannot happen to the detriment of human rights".
A hearing before a preliminary hearings judge for the four Egyptian intelligence service members has been set for April 29 in Rome.
Egypt has rejected the charges against the four and made it clear it has no intention of handing them over.
General Tariq Sabir and three subordinates, Athar Kamel Mohamed Ibrahim, Uhsam Helmi, and Magdi Ibrahim Abdelal Sharif, are accused of crimes that range from aggravated involvement in homicide to kidnapping and grevious bodily harm.
Rome prosecutors say that Regeni was tortured for days, resulting in "acute physical suffering" by being subjected to kicks, punches, beaten with sticks and bats and cut with sharp objects, and also being burned with red-hot objects and slammed into walls.
The suspects are set to be tried in absentia in Italy despite Rome prosecutors' efforts to get them to attend.
Egypt's prosecutor general, Hamada al Sawi, has said "there is insufficient evidence to prove the charges".
Witnesses have told the Rome prosecutors that Regeni was picked up by members of the Egyptian security services.
The witnesses, deemed reliable by the prosecutors, say the 28-year-old Cambridge doctoral researcher was abducted by agents of the Egyptian National Security Agency on January 25, 2016, the heavily policed fifth anniversary of the uprising that ousted former strongman Hosni Mubarak, and taken to at least two barracks in the subsequent hours.
The young man from Friuli was seen in a barracks near the Dokki metro stop in Cairo, the witnesses said, and later at another barracks where young foreigners are usually taken.
Regeni was found dead in a ditch on the Cairo-Alexandria highway on February 3, 2016, a week after disappearing.
He had been tortured so badly that his mother said she only recognised him by the tip of his nose.
At various times Egypt has advanced differing explanations for his death including a car accident, a gay lovers' tiff and abduction and murder by an alleged kidnapping gang that was wiped out after Regeni's documents were planted in their lair.
The student was researching Cairo street sellers unions for the British university, a politically sensitive subject.
The head of the street hawkers union had fingered Regeni as a possible spy.
Lack of cooperation on the case by Egypt led to Rome's temporarily withdrawing its ambassador from Cairo.
Rome recently drew condemnation from Regeni's parents by announcing the sale of two frigates to Egypt. (ANSA).