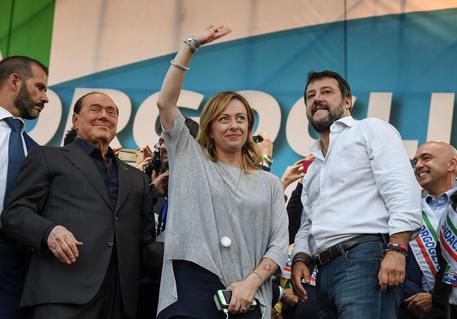 (ANSA) - ROME, JAN 21 - Italy's centre-right opposition on Thursday told President Sergio Mattarella it was "impossible" to work with the current parliament after Premier Giuseppe Conte lost his Senate overall majority after the defection of ex-premier Matteo Renzi's centrist Italia Viva (IV) party.
"While the health and economic emergencies are hitting households and businesses, Tuesday's vote (in the Senate) certified the shakiness of the majority," League leader Matteo Salvini, Brothers of Italy (FdI) leader Giorgia Meloni and Forza Italia (FI) leader Silvio Berlusconi said in a joint statement after talks with the president.
They said hey had reiterated their confidence in Mattarella's "wisdom".
Nationalist League and FdI leaders Salvini and Meloni, as well as centre-right leader and former premier Berlusconi, are asking for Conte to resign and a snap election to take place, which opinion polls say they would win.
In the joint statement, they said they had told Mattarella of their "great concern for the state of Italy". (ANSA).