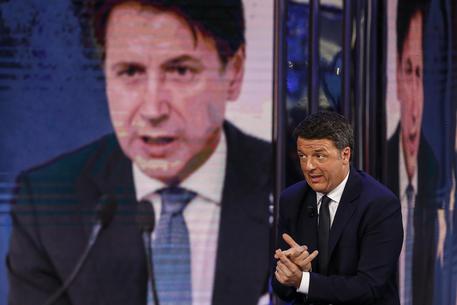 (ANSA) - ROME, JAN 13 - Ex-premier and centrist Italia Viva (IV) leader Matteo Renzi on Wednesday opened a government crisis by announcing that IV's two ministers, farm chief Teresa Bellanova and equal opportunities head Elena Bonetti, were quitting Premier Giuseppe Conte's administration.
He also said Foreign Underscretary Ivan Scalfarotto, IV's other government member, was also quitting. He said he had written to Conte communicating the resignations.
Renzi said IV had not opened the crisis, which had already been open "for months".
He said he had the utmost faith in President Sergio Mattarella, who is the arbiter of the crisis.
"The king is naked, politics is not a reality show," Renzi added, rebuffing Conte's offer of a "legislative pact" until the end of the parliamentary term in 2023.
Renzi said he would "never" switch allegiance to a possible future government led, after possible elections, by nationalist League party leader and former interior minister Matteo Salvini.
He also ruled out switching sides in the current parliament.
As for the outcome of the crisis, Renzi said it was up to Conte and IV did not have any "prejudicial" views.
Renzi ruled out a snap election, saying the next election would take place at the end of the parliamentary term in 2023.
Mattarella earlier on Wednesday stressed to Conte the need to emerge rapidly from uncertainty amid the alarming situation due to the COVID pandemic during talks on the looming government crisis, sources at the presidential palace said.
They said Conte had talks on cabinet's approval of the COVID Recovery Plan and the state of relations within the ruling coalition, after Renzi repeatedly threatened to pull IV out of the government over alleged flaws in the government's 222.9-billion-euro Recovery Plan.
Political observers say Conte may resign, there may be a new Conte-led government or merely a reshuffle, or a snap election where the right-wing opposition is favoured.
Renzi said some progress had been made on the Recovery Plan which had been revised to meet many of IV's strictures, but it had been "irresponsible" to rule out using a further 37 billion euros from the European Stability Mechanism, saying too many strings would be attached.
Conte erlier answered a question on whether the government was facing a crisis by saying "A crisis? I hope not". Conte said the government would only go on with the support of the whole majority.
Conte voiced the hope that Bellanova and Bonetti, would not quit government.
Asked if he would resign if IV quits the executive, Conte said "I hope we won't get that far".
Conte said the latest version of the 222.9-billion euro COVID Recovery Plan - the largest signle chunk of the EU's 750 billion Recovery Fund - "enables us to go on".
He said "people are asking us to go on and a crisis would not be understood by the country".
He said "I will work for the coalition up to the last".
On the possibility of IV MPs and Senators being replaced by a so-called makeshift "responsible" group of centrist opposition MPs and Senators, said te have been discouraged by Mattarella, Conte stressed the need for a "solid majority".
Conte said he was working for a "legislative pact" to last until the end of the parliamentary term in 2023, and was confident that talks about this would succeed. (ANSA).