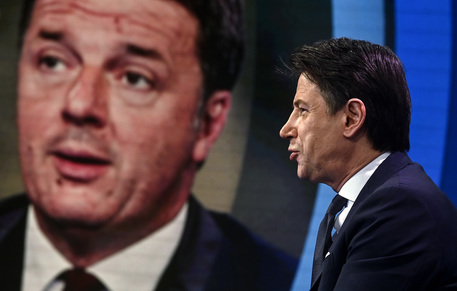 (ANSA) - ROME, JAN 13 - Premier Giuseppe Conte on Wednesday answered a question on whether the government was facing a crisis by saying "A crisis? I hope not".
Conte said the government would only go on with the support of the whole majority after ex-premier Matteo Renzi of the centrist Italia Viva (IV) party repeatedly threatened to exit the coalition, sparking a crisis.
Conte voiced the hope that the IV's two ministers, Farm Minister Teresa Bellanova and Equal Opportunities Minister Elena Bonetti, would not quit government.
Asked if he would resign if IV quits the executive, Conte said "I hope we won't get that far".
Conte said the latest version of the 222.9-billion euro COVID Recovery Plan "enables us to go on".
He said "people are asking us to go on and a crisis would not be understood by the country".
He said "I will work for the coalition up to the last".
On the possibility of IV MPs and Senators being replaced by a so-called "responsible" group of centrist opposition MPs and Senators, Conte stressed the need for a "solid majority".
(ANSA).