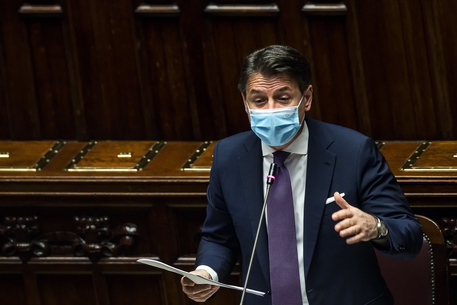 (ANSA) - ROME, OCT 29 - Premier Giuseppe Conte called for national unity on Thursday as he presented the government's latest restrictions aimed at combatting the spread of COVID-19 after a sharp upswing in contagion.
Among other things, the new restrictions, the latest in a series of measures passed by Conte's executive, mean Italy's bars and restaurants must stop serving customers at 6pm while cinemas, theatres, swimming pools and gyms must close completely.
The government has also approved a package of over five billion euros in aid for the sectors worst hit.
"Last week President (Sergio) Mattarella reminded us that all of the parts of the democratic order know that they must operate with a spirit of unity and cohesion," Conte told the Lower House.
"Allow me to say that this is truly the time to remain united".
The premier described the upswing in contagion as "sly and sudden" after Italy registered a record of almost 25,000 new coronavirus cases on Wednesday.
He said the aim of the new measures, which his government approved at the weekend, was to "mitigate and cool down" the contagion curve "in order to alleviate the heavy workload" of the national health system.
He said the measures were based on "the principles of maximum precaution, proportionality and adequacy.
"We never said we were out of danger and out of a state of alert," he added.
"The figures of the last two weeks indicate rapid growth.
"The number of new positive cases is worrying. It is difficult to trace contacts.
"This situation has put the national health service under severe pressure.
"We have never underestimated the pandemic".
There has been violence in several Italian cities in recent days during protests against the government's restrictions and curfews imposed at night by several regions. (ANSA).