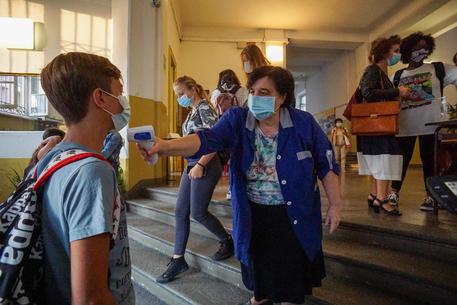 (ANSA) - ROME, SEP 16 - Unions representing people working in Italy's schools said Wednesday that they will take to the street to demonstrate on September 26 and demand "change".
At a press conference, union officials stressed that they were not going on strike that day.
"We want to be the lead players of this change," they said.
"We don't like the school system as it is and it should be changed".
The unions also called on the government to reopen dialogue with them Premier Giuseppe Conte on Tuesday vowed that his government would soon resolve the problems that have emerged after schools in most of Italy reopened on Monday for the first time since the start of the COVID-19 pandemic.
The national association of principals said many schools have had to reopen with reduced timetables because around 100,000 teaching positions still need to be filled nationwide.
Furthermore, many schools have not yet received the single-seat desks they need to be able to make sure pupils are at least one metre from each other in compliance with anti-COVID protocols.
Matteo Salvini's League party, meanwhile, said Wednesday that it has presented a motion of no confidence in Education Minister Lucia Azzolina over her "disastrous management" of Italy's schools. (ANSA).