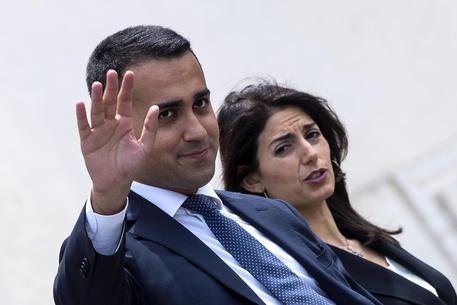 (ANSA) - ROME, 14 AGO - Members of the 5-Star Movement (M5S) on Friday voted to approve two major rule changes in an online poll.
The first makes it possible for the anti-establishment group to form alliances with traditional parties at the local level, not just civic lists.
This could pave the way for a series of deals with the centre-left Democratic Party (PD), with whom the M5S is allied at the national level in the coalition supporting Premier Giuseppe Conte's government.
The second changes restrictions on M5S elected representatives only serving two terms.
This will make it possible for Rome Mayor Virginia Raggi to stand for re-election next year.
"I'm standing again," Raggi said. "Now let's move forward with our heads held high. Together.
"Thank you all for the support and encouragement that you never failed to give.
"I speak in the plural form because we are a team. Together we will overcome the challenges that await us".
Foreign Minister and former M5S leader Luigi Di Maio, who was among the movement's bigwigs calling for the changes, expressed satisfaction too.
"Good luck to Virginia Raggi for her re-election bid and to all the mayor candidates who will be at the head of coalitions in the municipalities where we will run for election on September 20," he said.
"As of today a new era starts for the 5-Star Movement in participation in local elections".
PD leader Nicola Zingaretti welcomed the vote too.
"We are an alliance of different groups, which remain different," he said.
"But in order to govern you have to be allied, you cannot be adversaries.
"So if you manage to take a common path together, it is a very positive thing".
Anna Maria Bernini, a Senator for Silvio Berlusconi's opposition, centre-right Forza Italia party, was not enthusiastic.
"The strategic alliance that is on the horizon between the PD and the M5S, despite the failure of a disastrous government incapable of managing the crisis, is a nightmare scenario for Italy," she said. (ANSA).