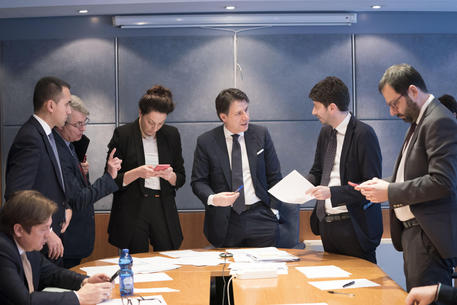 (ANSA) - ROME, 13 AGO - Premier Giuseppe Conte said Thursday that he stood by his government's handling of the coronavirus emergency after he and several of his ministers were notified of a criminal probe stemming from complaints about the decisions made.
Conte's office said that the premier and Justice Minister Alfonso Bonafede, Foreign Minister Luigi Di Maio, Economy Minister Roberto Gualtieri, Defence Minister Lorenzo Guerini, Interior Minister Luciana Lamorgese and Health Minister Roberto Speranza.received notification of an investigation that was opened after a series of complaints were made in various parts of Italy.
In a statement, the premier's office said the decision to transfer the case to a special court for ministers was a formality and that the prosecutors had attached a report saying the complaints were groundless and the case should be dropped.
The felonies named in the complaints include culpable homicide, abuse of office and attacking the Constitution.
"We have always taken responsibility, first and foremost the political responsibility, for the decisions taken," Conte said via Facebook.
"The decisions were highly challenging, sometimes painful, and were made without a manual, without guidelines or protocols of action.
"We always acted on the basis of science and conscience, without pretending to be infallible, but aware that it was necessary to make as few mistakes as possible to protect the interests of the whole national community in the best possible way".
One factor that has attracted particular attention is the failure to set up 'red zones' at Nembro and Alzano Lombardo, two Lombardy towns that were among the first to be hit by the pandemic, by sealing them off and locking them down.
Recently published documents showed that the government did not follow advice from its CTS panel of experts to create these two 'red zones' on March 3.
The government initially sealed off several towns in the province of Lodi and one in Veneto, Vo' , in the early stages of the COVID-19 emergency here.
The same measures were not applied to Nembro and Alzano Lombardo though and later in March the government imposed a national lockdown. Critics of the government have said lives could have been saved and a national lockdown averted if these towns had been sealed off.
"If the minutes of the CTS (meeting of March 3) are confirmed, Conte should be arrested," said Matteo Salvini, the leader of the opposition, rightwing League party.
"He didn't close down the red zones when he should have and he closed down Italy when he shouldn't have. That is a crime".
Bergamo prosecutors are investigating if any felonies were committed in the failure to promptly set up 'red zones' at Nembro and Alzano Lombardo. (ANSA).