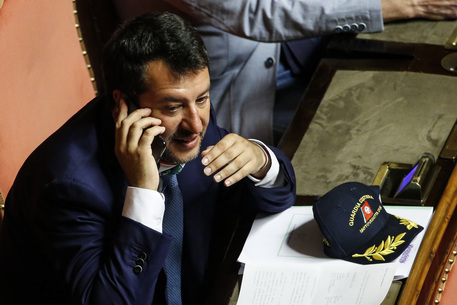 (ANSA) - ROME, 30 LUG - The floor of the Senate on Thursday voted to authorise putting League leader and Senator Matteo Salvini on trial in relation to the Open Arms case.
Salvini is accused of allegedly 'kidnapping' migrants on the Open Arms rescue ship when he was interior minister last year.
The authorization to proceed with the case was approved with 149 votes in favour and 141 against.
"The cowards, the human traffickers and those who preferred a top position to having dignity are celebrating," said Salvini.
"I am proud of having defended Italy.
"I would do it again and I will do it again because the migrant landings this July are six times what they were a year ago when the League was in government.
"I'll keep going with my head held high and with a clean conscience.
"I can look my children in the eye because I did my duty with determination and good sense".
The case is one of several stemming from Salvini's former closed ports policy against NGO-run migrant rescue ships during his 14-month stint as interior minister.
The Open Arms spent almost three weeks at sea last year after Salvini refused to give the OK for it to dock when he was a minister in Premier Giuseppe Conte's first government. (ANSA).