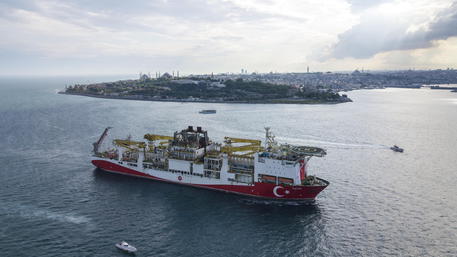 (ANSAmed) - ISTANBUL, JULY 28 - Turkey will suspend ''for a while'' energy explorations launched last week in the southeastern Aegean sea, in an area contested with Athens off the Greek island of Kastellorizo, Ibrahim Kalin, the spokesman forTurkish President Recep Tayyip Erdogan, told the Turkish edition of CNN. ''Our president has said: While negotiations continue, we are constructive', said Kalin, assuring that Ankara is ready to ''talk with Greece without conditions''.
''Greece is an important neighbor for us'', added Erdogan's spokesman, urging for ''joint actions also in contested areas''.
Stressing that German Chancellor Angela ''Merkel had a constructive role'' in the de-escalation of tensions with Athens, Kalin however said that in the Aegean ''we were not on the brink of war, as claimed by German media''.
''Let's solve our bilateral issues'' with Greece ''in a bilateral way. No results can be obtained by using EU membership as an instrument of pressure'', continued Kalin, referring to the threat of sanctions against Ankara made by French President Emmanuel Macron. (ANSAmed).