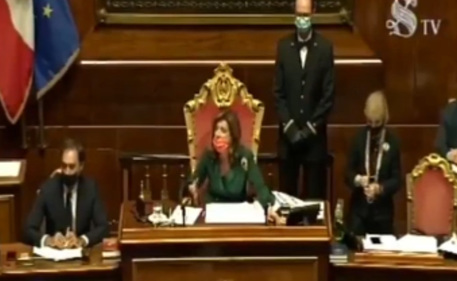 (ANSA) - ROME, JUN 19 - The Senate on Friday finally approved a decree to hold in September several Italian elections that were put off due to the coronavirus emergency.
It looked like the decree had been given the final green light on Thursday but that vote was subsequently cancelled because it turned out the quorum had not been reached.
The law regards Italy's next round of regional and local elections plus a Constitutional referendum on cutting the number of MPs from 945 to 600 and a few bye-elections for the House and Senate.
In the constitutional referendum, voters will be asked whether they approve a constitutional law that amends the Italian Constitution to reduce the number of MPs in parliament, from 630 to 400 in the Chamber of Deputies and from 315 to 200 in the Senate.
It was initially scheduled to be held on 29 March.
Elections will take place in seven regions.
They are Veneto, Campania, Tuscany, Liguria, Marche, Puglia and Valle d'Aosta.
Municipal elections will take place in 1,149 comuni across Italy.
Some 18 provincial capitals will go to the polls: Agrigento, Andria, Aosta, Arezzo, Bolzano, Chieti, Crotone, Enna, Fermo, Lecco, Macerata, Mantua, Matera, Nuoro, Reggio Calabria, Trani, Trento and Venice.
Three of these are also regional capitals: Aosta, Trento and Venice.
On Friday the Senate finally approved the decree with 158 votes in favour and none against.
As with Thursday's vote that was subsequently cancelled, the opposition snubbed the vote. (ANSA).