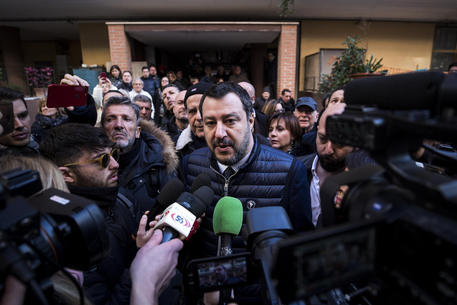 (ANSA) - Rome, February 12 - League leader Matteo Salvini said his conscience was clear on Wednesday ahead of a vote in the Senate on whether prosecutors should be able to proceed against him for allegedly illegally detaining a group of migrant when he was interior minister in a previous government.
"Ready to intervene in the Senate with head held high and the clear conscience of someone who has defended his land and his people," Salvini said via Twitter. He also paraphrased a quoted by poet and fascist sympathizer Ezra Pound: "If a man is not willing to fight for his ideas, either his ideas are worth nothing, or he is worth nothing".
Salvini could be sent to trial for his conduct when he was interior minister for failing to give the ok for more than 100 rescued migrants to disembark from the Gregoretti Coast Guard ship for several days during a long standoff in July.
The Senate's immunity panel has given the OK for the Catania court of ministers' request to parliament to proceed against Salvini for allegedly abusing his power.
The floor of the Upper House now needs to decide whether to ratify the decision to lift Salvini's parliamentary immunity.
Salvini, who operated a closed ports policy while interior minister in the last government, sending the League's poll ratings sky-high, faced prosecution before but his parliamentary immunity was never lifted so he could go to trial in previous similar cases.
He has said that, as in other such cases, his decision was made with the rest of the government he was then part of.
Premier Giuseppe Conte, on the other hand, said he was not involved in the specific decision of whether to allow the migrants to disembark.
Salvini pulled the plug on Conte's first government in August prompting the creation of a new ruling majority.