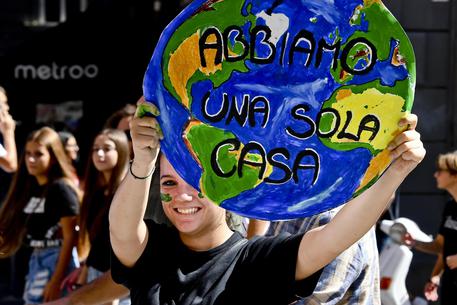 (ANSA) - Rome, September 27 - Over one million people took part in Friday's protests all over Italy demanding action to combat the climate crisis, according to figures provided by organizers. "There are 200,000 people in Rome, which attracted the biggest crowd, followed by 150,000 in Milan," said Gianfranco Mascia of Fridays For Future. "There are around 80,000 in Naples, 50,000 in Florence, 20,000 in Turin and Bologna and 10,000 in Palermo and Bari". The 'green wave' could be seen in protests in 160 Italian towns and cities as part of the third 'Global Climate Strike'.
A slogan in Palermo read 'the world isn't a trash dump' while one in Palermo said 'Don't break our future'. A banner in Cagliari was more threatening, declaring 'We'll submerge you before the sea does - we want climate social justice'. Greta Thunberg, the 16-year-old Swedish climate activist who inspired the protest movement, was pleased. "Incredible pictures from all over Italy! This is Torino," she said in a Twitter post featuring a video of the Turin march.
"#ClimateStrike #FridaysForFuture". Italian Education Minister Lorenzo Fioramonti of the 5-Star Movement (M5S) had sent a circular to public school principals encouraging them to excuse students who may be absent on Friday due to participation in the climate strike. The demonstrations wrap up the worldwide Week for Future initiative that began on Friday, September 20, kicking off strikes in 130 countries overall, involving four million people, organisers said. Most countries chose to demonstrate on September 20, but Italy chose the 27th, along with 26 other countries, including Canada, where Thunberg was set to attend the demonstration in Montreal.