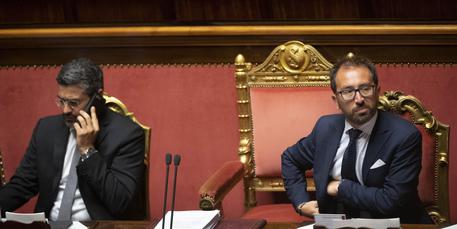 (ANSA) - Rome, August 19 - Two 5-Star Movement (M5S) ministers on Monday denied that the M5S would make a government deal with two prominent Democratic Party (PD) members, ex-premier and former leader Matteo Renzi and former relations with parliament minister and ex-cabinet secretary Maria Elena Boschi, would make a government deal with the M5S following the collapse of its alliance with Matteo Salvini's League party.
The M5S's minister for relations with parliament, Riccardo Fraccaro, described the notion as "the fake news of the summer which the League is spreading after bringing the government down.
"I want to say this clearly, we will not do deals with Renzi and Boschi". The M5S's justice minister, Alfonso Bonafede, was just as emphatic.
"The M5S will never sit down with Renzi and/or Boschi", he said.
"The question is not a personal one, the country still needs a change which is totally incompatible with certain names.
"It's a delicate moment for the country.
"Enough already of fake news, let's be serious, please.
"Thanks you," he said.
The notion of an M5S-PD government has prompted League leader Matteo Salvini to try to reverse the government crisis he caused by saying the alliance with the M5S had run its course.