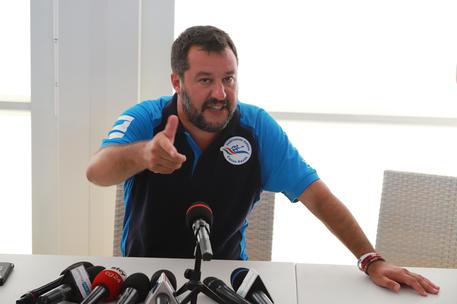 (ANSA) - Termoli, August 9 - Interior Minster Matteo Salvini said Friday that he has not decided whether his League party will run alone or allied with other groups in eventual early elections. "Nothing has been decided about whether we'll run alone," he said. "We have an idea about Italy over the next five years that we will put to those who agree with it". Speaking to reporters late on Thursday after he effectively pulled the plug on his coalition government with the 5-Star Movement (M5S), Salvini said that he would stand as premier candidate and ask the Italian people to give him "full powers to do what we have promised to do". Giorgia Meloni, the leader of the right-wing Brothers of Italy (FdI) party, on Friday called on Salvini to form an alliance with her. "We form alliances before the elections, not after, because we want to be clear," Meloni told RAI radio. "We are the most coherence party. We are concrete and reliable. "I don't think Salvini will run alone. "It wouldn't make much sense to have another government formed with power games after the vote. "It would be better to have an alliance that the Italian people have been called for for months". Meloni did not mention the other party that traditionally is also part if the centre-right alliance in Italy, Silvio Berlusconi's Forza Italia.