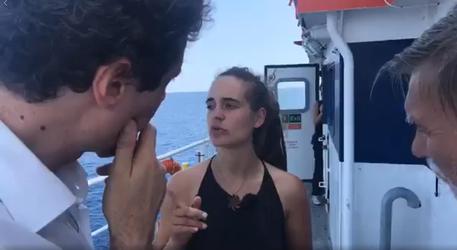 (ANSA) - Agrigento, June 28 - Carola Rackete, the captain of the Sea-Watch 3 migrant-rescue ship, has been put under investigation by prosecutors in the Sicilian city of Agrigento, sources said on Friday.
The ship is currently anchored in front of the port of Lampedusa after Rackete defied an order to stay out of Italian waters on Wednesday. The migrants were picked up by it off Libya over two weeks ago.
Rackete, 31-year-old German, is being probed for allegedly aiding illegal immigration for refusing to obey a military vessel, the sources said. Premier Giuseppe Conte said Friday that several EU States have agreed to take some of the around 40 migrants on board the Sea-Watch 3 to end the deadlock regarding the search-and-rescue ship. "Three or four countries are willing to take part in the redistribution of the Sea-Watch migrants," Conte told reporters at the G20 summit in Osaka. Foreign ministry sources said that, actually, more than four EU countries were willing to take some of the Sea-Watch migrants, including France, Germany, Luxembourg and Portugal.
Conte had a long meeting with Dutch Prime Minister Mark Rutte about the Sea-Watch case on the sidelines of the G20. The ship is run but a German NGO but it is flies the Dutch flag and Rome says the Netherlands should have intervened in this case. This week the Italian embassy in The Hague took a formal step about a possible dereliction of duty by the Dutch authorities.