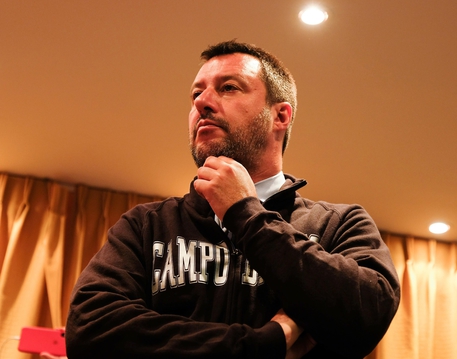 (ANSA) - Palermo, May 16 - An Italian teacher has been suspended after some of her students compared Interior Minister and rightist populist League party leader Matteo Salvini's security and migrant decree to the Fascist racial laws on Holocaust Remembrance Day in January.
Rosa Maria Dell'Aria, 63, a 30-year teacher at a Palermo industrial school, told ANSA "I consider what has happened the greatest bitterness and the biggest wound of my professional life".
The students said "the images in the power point presentation were not chosen by the teacher who only gave us a hand in fixing the text from the linguistic standpoint".
Voicing solidarity with the teacher, they said "no one was forced to do the project".
Centre-left opposition Democratic Party House deputy president and their culture committee chief Anna Ascani said "some students link Salvini to Fascism, something that Salvini himself often does, a friend of (neoFascist group) CasaPound, and the ministry decides on a very harsh sanction, with a suspension and halving of pay for the teacher, accused of not preventing that comparison.
"Is the next step a return to the (Fascist youth organisation) Opera nazionale balilla? "The Palermo episode calls for an immediate official clarification from the education ministry." "Do some people want to turn Italian schools into barracks?".
Another PD MP, Carmelo Miceli, called on Education Minister Marco Bussetti to "clear up an extremely serious incident".
Salvini said "I don't know who it was who proposed, controlled, ordered, or suggested, but for someone to put on a par Interior Minister Matteo Salvini - who may be likeable or unlikeable - with Mussolini or even Hitler, seems absolutely demented to me".
The education ministry said later that Bussetti had tasked his offices to look into the matter with the territorial office, noting that it was the provincial office that suspended Dell'Aria because she allegedly was not sufficiently vigilant on the work of her 14-year-old charges.