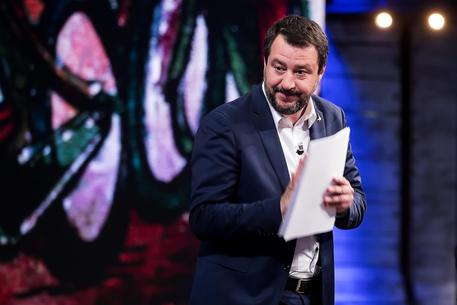 (ANSA) - Rome, April 17 - Deputy Premier and Interior Minister Matteo Salvini on Wednesday said he has the authority to decide on migrant landings.
"The interior minister has national authority over public security and must authorize landings", Salvini, who is the League party's leader, told State broadcaster Radio1's program 'Radio anch'io'.
"I have all the authority to decide.
"The port is assigned by the interior minister, whether you like it or not, Italians pay me to defend them and I am doing it".
Commenting amid reported tension with members of the military and the defense ministry after a directive issued by the interior ministry on Tuesday aimed at dealing with illegal immigration and terrorists possibly arriving from war-torn Libya, Salvini said he had "no time to respond to controversies".
Salvini also said the risk of terrorists infiltrating migrant boats from North Africa is a "certainty".
"This is why I need to stress that no landings are allowed in Italy", he said.
"There are no arrivals without a permit". He added that "this year we have cut down by 92% arrivals by sea and halved the number of dead and missing. "Clearly, a serious and rigorous policy gives results".