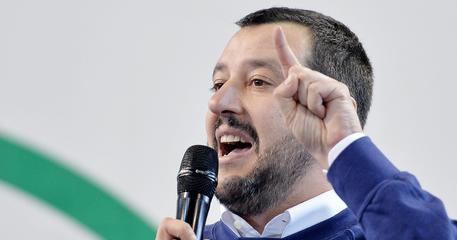 (ANSA) - Rome, February 19 - The Senate's immunity panel on Tuesday voted against granting a request from criminal prosecutors to proceed with charges against Deputy Premier and Interior Minister Matteo Salvini over the Diciotti case. Magistrates in the Sicilian city of Catania requested authorization from parliament to proceed against the leader of the anti-migrant League for alleged kidnapping over migrants held on board the Diciotti coast guard ship in a standoff with the EU last August.
Salvini said the case should not be allowed to proceed as he was doing his job as minister.
On Monday members of the 5-Star Movement (M5S), the League's coalition partners, voted 59% to 41% for the group's lawmakers to vote against lifting Salvini's parliamentary immunity. It went the same way on the Senate panel on Tuesday, with 16 backing the line proposed by panel chair Maurizio Gasparri of Silvio Berlusconi's centre-right opposition Forza Italia (FI) party, while six were against. Some M5S supporters expressed unease about backing immunity for Salvini, saying the movement has traditionally been against MPs getting different treatment in such cases.
Senators from the centre-left opposition Democratic Party (PD) shouted "shame, honesty" at the M5S Senators after the vote, referring to the movement's rallying cry when it emerged onto the political scene.
M5S Senator Mario Michele Giarrusso replied "my father and mother are at home regularly: others are under house arrest, and then they speak of honesty", referring to the parents of former PD leader and ex-premier Matteo Renzi, placed under house arrest Monday night over alleged fraudulent bankruptcy and false invoices.
He also made a hand-cuffs gesture at the PD Senators.
Salvini said after the vote he would have accepted "any response" from the panel.
"I would have accepted any response, aware of the fact that what I'm doing and we're doing we do so foe the benefit of our country," he said.
"So I was and am ready for any kind of judgement.
"For me, first comes the defence of borders and the security of my people and so I worked calmly yesterday and I work calmly today," he said.
Salvini went on: "we're a team (in government). In government there is a team, there are no individuals, so I say thanks for the confidence in the team".
The immunity panel's vote is not the final say in the case.
There will now have to be a vote in the floor of the upper house.
But with the M5S Senators having pledged to follow the lead of their members' online vote, it appears to be a foregone conclusion in favour of Salvini.
The movement had appeared dangerously split on whether to vote for or against allowing the kidnapping charges against Salvini to proceed.
But Salvini said: "I can guarantee that the government will not collapse".
"I don't fear the court of the people".
Salvini also said that "we're all in the same boat" referring to Premier Gisueppe Conte, fellow Deputy Premier Luigi Di Maio, the M5S leader, and Transport Minister Danilo Toninelli, also of the M5S, who wrote in statements to the panel that the interior minister was implementing the policy of the whole government.
Di Maio also said the government would go ahead no matter what the result of the vote.
"The government will go on. I have made a commitment to the Italian people and I intend to carry it out," he said.
Salvini said he is "not asking for favours or help from anyone" in the vote.
"If, to defend the borders of my country, the safety of Italians, to defend the national interest, it brings me and will bring me other charges and other investigations, I'm very ready to face them," Salvini said.
Salvini has also threatened to take legal action if reports of a possible deal within the government over the Turin-Lyon TAV high-speed rail line and the Diciotti cases continue.
"I'll sue the next person who talks about that," League leader Salvini said during a visit to the central city of Terni last week.
Salvini says the project should go ahead but the M5S are opposed to it.
Italy's centre-left and centre-right opposition parties, meanwhile, have accused the M5S Senators of ducking their responsibilities by delegating their decision to the party base, and of betraying their movement's founding principles.
PD Senator Laura Garavini said "they used to shout 'honesty', now they've become lackeys".