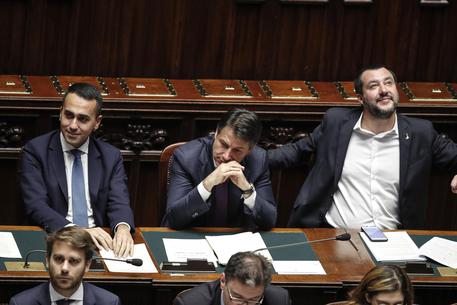 (ANSA) - Rome, January 10 - Deputy Premiers Luigi Di Maio and Matteo Salvini both played down talk of turmoil within the government on Thursday following tension about Italy's decision to take some of the 49 migrants who had been at sea for weeks after being rescued by NGO-run ships in the Mediterranean. League leader and Interior Minister Salvini, who has spearheaded a tough stance that has seen NGO-run migrant-rescue ships denied access to Italy's ports, had said he was against receiving any of the asylum seekers. But at a meeting of senior figures with Premier Giuseppe Conte late on Wednesday, the executive reached an agreement for Italy to be among eight European countries to take a share of the migrants.
Around 10 of the people who were finally allowed to disembark in Malta on Wednesday will come to Italy and they will be entrusted to the care of the Waldensian Church at no cost to the State. 5-Star Movement (M5S) leader Di Maio said Wednesday's meeting was "very cordial".
"You always find a solution with Giuseppe and Matteo," he told Radio Anch'io.
Salvini also said the government was not in crisis.
"I don't leave anything half done and I don't want to cause any government to collapse," Salvini told RTL radio. "The government is fine. We have done a lot in six months and the two government parties have the confidence of 60% of the Italian people, which is pretty unique".