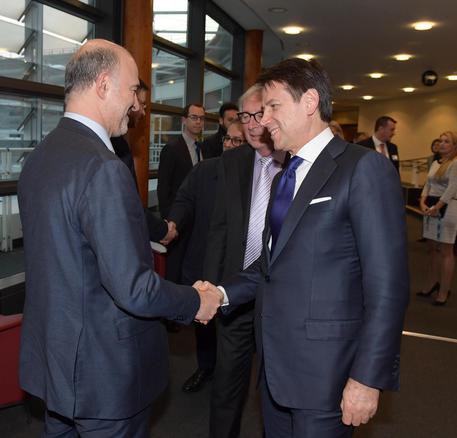 (ANSA) - Rome, December 13 - European Economic Affairs Commissioner Pierre Moscovici said Thursday that progress has been made in negotiations with Italy over its 2019 budget, but added that an agreement has not yet been reached.
On Wednesday Premier Giuseppe Conte proposed setting Italy's deficit target to 2.04% of GDP next year, rather than the 2.4% pencilled in in the government's draft budget plan, in a bid to stop the EU opening an infringement procedure. "It's a step in the right direction, but we aren't there yet," Moscovici said. "There are still steps to take, perhaps by both sides".
Conte's office gave no comment on Thursday in reference to Moscovici saying further progress was needed. Sources said that the premier was focused on the negotiations and the mood in the office was confidence and pride in the proposal that was made. The sources said that the proposal featured a significant cut in the deficit-to-GDP ratio without touching plans to introduce a 'citizenhip wage' basis income for job seekers and the 'quota 100' pension reform to effectively bring down the retirement age.
The sources said that the government will continue on the road it has taken.