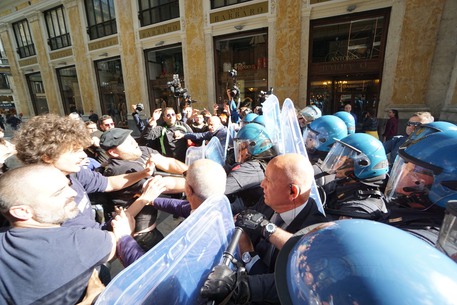 (ANSA) - Naples, November 15 - Tension was high in Naples on Thursday when protestors tried to break through a police cordon to get to the area of the prefect's office, where Deputy Premier and Interior Minister Matteo Salvini was taking part in a meeting of the local committee for public order.
The police charged the protestors, from the Insurgencia leftwing social centre. One young man was seen bleeding from the head, apparently after being hit by a baton.
League party leader Salvini said he received an "extraordinary welcome" in Naples.
"They told me that there were the usual idiots from the social centres (causing trouble)," Salvini said after the meeting.
During the visit Salvini said that the government plans to stiffen penalties for drug dealers.
"(Justice) Minister (Alfonso) will present a bill raises the current penalties for dealing five fold," Salvini said.