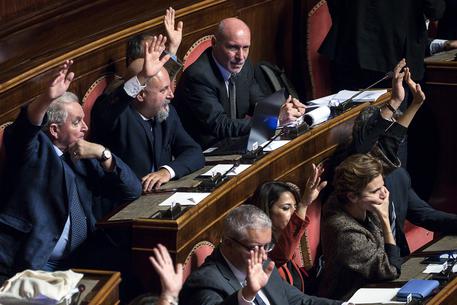 (ANSA) - Rome, November 6 - Relations with Parliament Minister Riccardo Fraccaro told the Senate on Tuesday that the government was presenting an amendment that replaces the whole text of its decree on security and migration. Fraccaro added that the executive was putting the amendment to a confidence vote, after getting clearance from the Speaker's office. Among other things, the decree, drafted by Deputy Premier and Interior Minister Matteo Salvini, the leader of the League party, makes it easier for the authorities to deport asylum seekers found guilty of felonies.
The package has caused tension within the ruling coalition due to the opposition of some members of the 5-Star Movement (M5S) to certain elements of it.
The confidence vote in the Senate on the amendment will take place on Wednesday morning, a meeting of Upper House whips decided on Tuesday. "After months of work, the final vote on the Senate on the security-and-immigration decree is coming," Salvini said via Facebook.
"With this, I'd like to give this country some rules and a little order.
"It's a step forward for the security not just of Italian citizens, but also for that of many legal immigrants who are good people and should not be lumped together with rapists, pickpockets, drug dealers - people who are not running away from war, but are bringing war to our home". Silvio Berlusconi's opposition centre-right Forza Italia party said it wanted to back the decree but would not take part in the vote in protest at the decision to put it to a confidence test. The Lower House, meanwhile, approved a bill that makes it impossible for people accused of serious crimes punishable by life sentences to opt for a fast-track trial.
Sentences passed at a fast-track trial are significantly shorter than they would be via the ordinary procedure.
The bill now passes to the Senate.