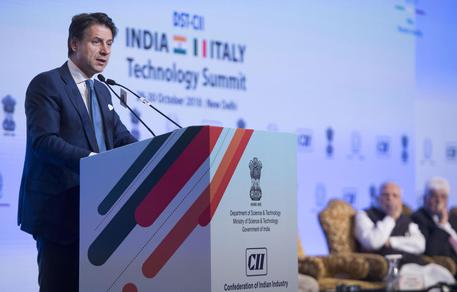 (ANSA) - New Delhi, October 30 - Premier Giuseppe Conte said Tuesday that his government was not taken by surprise by ISTAT reporting Italy's GDP was flat in the third quarter. "We had forecast this," Conte told reporters on the fringes of the Tech Summit event in New Delhi. "That's why we'll have this expansive budget". The European Commission has rejected Rome's draft budget, which sees Italy running a deficit of 2.4% of GDP next year.
The executive has said it has no intention of changing the package, arguing an expansive budget is needed to boost growth, improve living standards and reduce the debt-to-GDP ratio, as well as to finance the pledges in the contract of government.
Conte rejected talk of the 2019 deficit being even higher than 2.4% of GDP.
"The budget was not improvised," Conte said.
"We said that the maximum is 2.4%. We don't intend to go over".