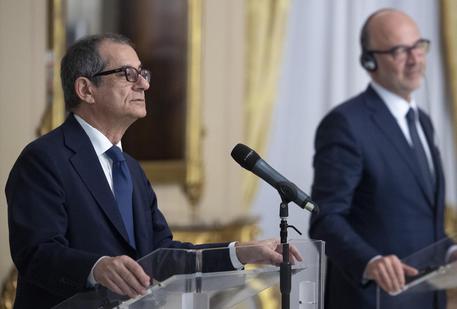 (ANSA) - Brussels, October 18 - The 2019 Italian budget bill shows a deviation "without precedent in the history of the Stability Pact", the European Commission says in its letter of reproach to Italy.
This is due, it said, to an expansion close to 1% and a deviation form targets equal to 1.5%.
This has given rise, it said, to "a particularly serious non-compliance with the Pact's obligations".
It asked the government to give a response to its strictures by Monday October 22.
The letter, handed to Economy Minister Giovanni Tria by Economic Affairs Commissioner Pierre Moscovici in Rome, also said the non-compliance with the recommendations of the parliamentary budget office broke EU rules. Moscovici said that the budget deficit "cannot stay at 2.4% (of GDP), that is impossible" Tria said after meeting Moscovici that he hoped to bring Italy's and the European Commission's positions "closer" after receiving a letter from the EC saying the 2019 budget represented an "unprecedented deviation" from the Stability Pact.
"What we have described as constructive dialogue opens, starting from different assessments of our economic policy.
"We have noted these different assessments, we believe we have to deepen our explanations of the reasons for our policy, to better make known to the Commission the structural reforms that we will carry forward with the budget law and therefore we hope to be able to bring our positions closer." Moscovici said the deficit of 2.4% of GDP "is a concern to the Commission and to many member States.
He said there had been no discrimination against Italy, which had been treated "on a par with everyone else" Moscovici said the Commission was a "referee" and not an opponent of Italy.
He said "we are asking who will foot the bill for the new measures" in the budget, such as a basic income, flat tax and pension reform overhaul.
The commissioner went on to say that "now we must go forward with sangfroid, according to EU rules".
He said "let us leave political opinions outside the door".
Moscovici added "I only have a Plan A, to stay in the euro together".
Premier Giuseppe Conte said "the situation is not precipitating because of the Commission's letter".
He said "we will fend off the negative judgement of the ratings agencies".
Conte said "the Italian economy is in good health, the fundamentals are solid".
Tria added that "parliament can improve the budget, but within the financial figures (already laid down)".
Deputy Premier Luigi Di Maio, the Five Star (M5S) leader and labour and industry minister, urged people "not to pontificate with the letter from Brussels".