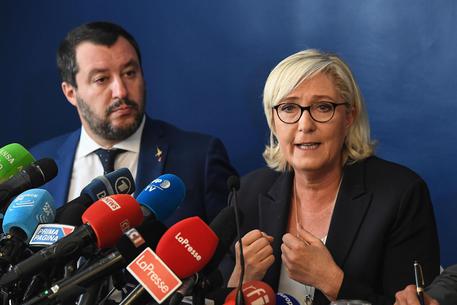 (ANSA) - Rome, October 8 - Italian Deputy Premier and Interior Minister Matteo Salvini, the leader of the Euroskeptic League party, said on Monday he shared the same idea of Europe as the leader of France's rightist nationalist Rassemblement National, lawmaker Marine Le Pen.
"We share the same idea of Europe, of agriculture, of work, of the fight against immigration", Salvini said during a congress of labor union UGL on 'Economic growth and social perspectives in a Europe of Nations' attended by the French politician.
"We are against the enemies of Europe, who are (Jean-Claude) Juncker and (Pierre) Moscovici, closed in the bunker of Brussels", added Salvini of the European Commission president and the European economic affairs commissioner, who have both urged the Italian government to abide by the EU's budget rules and avoid deviating from the goals agreed with Brussels.
Le Pen for her part told the congress that the "EU has trampled on the values of solidarity: we are now at an historic moment".
"In May we will succeed in reaching a Union that kicks off with new values against globalization", she said of European elections scheduled at the end of May next year.
Salvini said he shared "values, principles, coherence, pride" with Le Pen. "At the end of May, we well have a revolution of common sense".