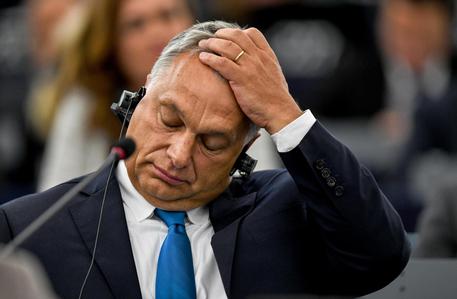 (ANSA) - Brussels, September 12 - The European parliament on Wednesday approved a report on the rule of law in Hungary, for the first time triggering Article 7 of its treaties which could lead to sanctions against Premier Viktor Orban's country. The next step is up to the European Council, that is the EU's heads fo state and government.
Italy's governing parties split on the issue.
The rightwing League, which is allied with nationalist Orban, voted against the report.
The anti-establishment 5-Star Movement voted in favour of the report.
It is the first time the legislature has triggered an article 7 procedure against an EU member state. The most severe punishment under article 7 is stripping a country of its voting rights in the EU.
The EP said the Hungarian government poses a "systematic threat" to democracy and the rule of law.
The vote was carried with the support of 448 MEPs, narrowly clearing the required two-thirds majority, after Orbán was abandoned by his allies in the centre-right European People's party.
The outcome heightens the prospect of a split in the EU's dominant centre-right bloc - to which the German chancellor, Angela Merkel, also belongs - which has been riven by divisions over migration and the future of Europe.