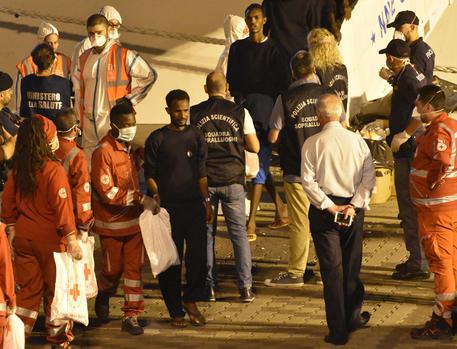 (ANSA) - Rome, August 27 - A probe against Interior Minister Matteo Salvini for allegedly kidnapping 177 Eritrean migrants aboard the Diciotti coast guard ship will be a "boomerang", Salvini said Monday.
An Agrigento prosecutor has placed Salvini under investigation for kidnapping the migrants, who were allegedly unlawfully held for five days at sea and then another five days at Catania harbour.
Salvini said he was not "cowed" and that he would not ask the Senate to refuse to lift his immunity from prosecution.
"I only did my job as minister and I'm ready to do it again," Salvini said.
Some 100 of the migrants will go to a Catholic centre at Rocca di Papa near Rome, Pope Francis said.
Albania and Ireland will take about 20 each.
Three Egyptians and a Bangladeshi have been arrested on charges of being the migrant traffickers.
The other deputy premier, Industry and Labour Minister Luigi Di Maio, said in the next such case Italy "will negotiate directly with individual States".
He said the government was defending Italy's interests.
Most of the Eritrean migrants from the Diciotti will be moved from a Messina hotspot to a Catholic Church centre at Ariccia near Rome, the Italian Bishops' Conference (CEI) told a news agency on Monday.
"They will be moved as soon as possible, in the coming hours, to the Ariccia centre run by Auxiluim, pending their transfer to the many diocese who have given their availability: Turin, Brescia, Bologna, Agrigento, Cassano all'Jonio, Rossano Calabro, to cite only those I know about," CEI's head of social communications, Father Ivan Maffeis, told the SIR religious news agency.
The CEI agreed to take in about 100 of the migrants while Albania and Ireland took 20 each to end a stand-off after Salvini kept them aboard saying they would not land until the EU agred to take them.
Meanwhile Germany said funding the EU budget is an obligation laid down in the EU's founding treaties, commenting on Italy's threat to withhold some of its alleged 20 billion euro EU budget payment unless the EU agreed to take in the Diciotti migrants.
EU budget funding "was ratified in the European treaties, and it is valid for all," said Chancellor Angela Merkel's spokesman Steffen Seibert.
The EU must change its tune on migrants or Italy's budget veto will be "certain", Deputy Premier Luigi Di Maio said Monday.
Di Maio was speaking after European Budget Commissioner Guenther Oettinger said Monday that Italy doesn't pay 20 billion euros a year to the EU budget as stated by Di Maio in threatening to cut it unless the EU took in the Diciotti migrants, but 14-16 billion.
"Taking into account what it receives from the EU budget that leaves a net contribution of three billion a year," Oettinger said.
Di Maio replied that Oettinger's description of his claim as a "farce" "shows what consideration they have of our country".
"They're evidently used to Italian premiers and ministers going cap in hand to Brussels".
"Funding is not a dogma," said Di Maio, leader of the anti-establishment 5-Star Movement, and also industry and labour minister.
"The music in Europe is going to change," he said, saying that soon there would be talk of "real solidarity and not restrictions that are unsustainable from both the social and economic standpoint".
European Parliament President Antonio Tajani said Monday that said you can't criminally try a policy like Salvini's hardline stance on migrant non-reception.
"You can't try a political line, in the end Salvini will be acquitted by the ministerial court and then it becomes only a propaganda clash that doesn't solve the real problem: neither the immigration one nor the that of the separation of powers," Tajani said.
"The affair strongly highlights the problem of justice reform, we can't waste any more time".
Italians overestimate the presence of migrants in their country more than any other nationality in the EU, according to a survey by think tank Istituto Cattaneo out on Monday.
The study on the phenomenon of immigration in Italy and its perception said those polled overestimated the presence of migrants by 18%.
Immigrants in Italy account for roughly 8% of the overall population.
The poll also found that 74% of the Italians interviewed were convinced that immigrants were responsible for higher crime rates against a European average of 57%.
A reported 58% of those interviewed for the survey also said they thought more immigration would imply fewer jobs for residents in Italy against a European average of about 14%.
There are "points of convergence" between Italy and Hungary on immigration policy, Hungarian Foreign Minister Peter Szijjarto said on the eve of Tuesday's meeting between Premier Viktor Urban and Salvini.
Szijjarto said "the defence of Europe's borders consists in managing immigration.
"Hungary has already demonstrated that land borders can be defended.
"Australia and Italy have shown that maritime borders can be defended too".
Meanwhile a cargo of boat people reached Australia from Vietnam as Australia's No Way naval blockade against migrants - which Salvini says he wants to emulate - showed its first 'hole' in four years.
The migrants were promptly arrested.
Salvini said "this is the model I want to arrive at! "Long live the civilised and serious Australia".
German Interior Minister Horst Seehofer said Monday Germany would soon strike a deal with Italy on the secondary movement of migrants. An accord is needed so that asylum seekers already registered in Italy, and therefore with their fingerprints in the Eurodac database, can be sent back by Germany within 48 hours, the minister recalled.
Germany signed bilateral accords with Spain and Greece between the end of July and the start of August.