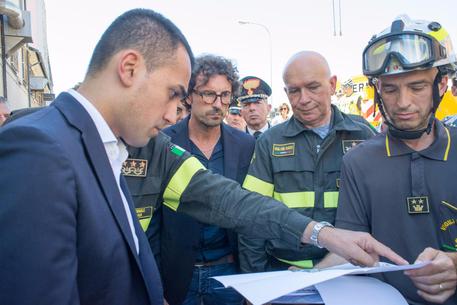 (ANSA) - Rome, August 16 - Labour and Industry Minister and Deputy Premier Luigi Di Maio reiterated on Thursday that the government intends to strip highways company Autostrade per l'Italia of its concession after Tuesday's bridge-collapse disaster in Genoa. On Wednesday Premier Giuseppe Conte said the League-5-Star Movement (M5S) executive would not wait for the outcome of a criminal investigation and trial into the collapse before taking action.
"I confirm the (decision to) withdraw Autostrade's concession," said M5S leader Di Maio told Radio 24.
"I want to reiterate the government's position, which is that it is not acceptable for people to die while paying a toll.
"The stock market had already condemned Atlantia, the owner of Autostrade per l'Italia, before the government announced the withdrawal of the concession.
"It was clear that those who should have done the maintenance did not do it". Experts have expressed doubts about whether the government can revoke Autostrade per l'Italia's concession without invoking penalties of many billions of euros.
The company has said it is confident it can show it respected the conditions of its concession for the Genoa highway, saying it carried out regular maintenance and safety checks.