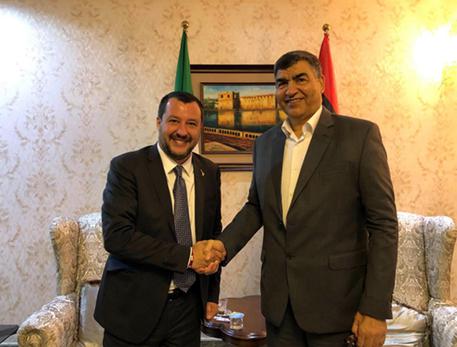 (ANSA) - Rome, June 25 - Interior Minister Matteo Salvini said Monday that hotspots for asylum seekers trying to enter Europe should be in the south of Libya, rather than in Italy. "Reception hotspots in Italy? It would be a problem for Italy and for Libya itself because the death fluxes would not stop," Salvini, who is on a visit to Tripoli, said via Twitter.
"We have proposed reception centres situated at the southern border of Libya to prevent Tripoli becoming a bottleneck". Libyan Deputy Premier Ahmed Maiteeq, however, ruled out the prospect of the North African country hosting camps for asylum-seekers. "We categorically reject (the idea of) camps for migrants in Libya," Maiteeq told a joint press conference following with Salvini. "It is not allowed by Libyan law".