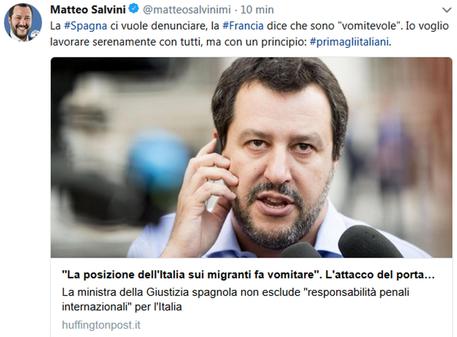 (ANSA) - Rome, June 12 - The two partners in Italy's populist government, Interior Minister Matteo Salvini of the anti-migrant Euroskeptic League and Luigi Di Maio of the anti-establishment 5-Star Movement, on Tuesday hit back at France and Spain after criticism of Salvini's rejection of NGO migrant ship Aquarius.
Meanwhile the European Union said everyone was responsible for the migrant emergency, not just Italy and Malta.
Salvini said on Twitter "Spain wants to report us, France says I'm 'sickening'. "I want to work serenely with all, but with one principle: #Italiansfirst". League European Parliament Whip Mara Bizzotto replied to France's En Marche spokesman Gabriel Attal's description of Italy's migrant policy as "sickening" by saying "on migration the position of Macron's France is sickening, not that of Minister Salvini." She said "the En Marche spokesman should think about his government and should wash his mouth out before talking about Italy and Salvini". Macron himself called Salvini "cynical and irresponsible" in refusing migrant ship Aquarius, which was eventually accepted by Spain.
Europe should give "concrete aid" rather than money to help ease the migrant emergency, Salvini said. "We don't want money from Europe, we want concrete aid on the thousands of relocations that are only on paper and not effective," he said. He said the aim should be "reducing departures and have the north of the African continent as country of reception and selection between real refugees and fake refugees." Salvini dismissed as "risible" the current contribution of the EUNavForMed mission.
Italy and Germany will present a joint proposal on the protection of the Europan Union's external borders "so as not to waste further time," the Italian interior ministry said after a "long and cordial" phone call between Salvini and his German counterpart Horst Seehofer. The ministry said the ministers saw eye to eye on security and immigration policies.
Salvini "accepted with pleasure the German minister's invitation to a meeting shortly in Berlin".
France should open its ports to migrants like Spain has done, Industry and Labour Minister and Deputy Premier Di Maio said.
Replying to the accusation of "irresponsibility" from President Macron, Di Maio said "I'm happy the French have discovered responsibility: if they want we will help them". Di Maio added that "they should open their ports and we'll send a few people to France".
Di Maio commented on Macron's criticism of Italy's new harder line on migration by saying "they can talk...".
The Italian premier's office said that "statements about the Aquarius affair from France are surprising and denote a serious lack of information on what is really happening. "Italy cannot accept hypocritical lessons from countries who have always preferred to turn away on immigration issues".
The office of Premier Giuseppe Conte said Italy had received "solidarity" from Spain in the Aquarius case while France had shown "cynicism". It said "the Italian government has never abandoned the almost 700 people on board the Aquarius. The ship was immediately flanked by two motor launches that gave all necessary support. "Having noted Malta's refusal to collaborate and allow the people to land, we accepted an unprecedented gesture of solidarity from Spain. "The same gesture did not come from France, which instead has on several occasions adopted much more rigid and cynical policies in the sphere of (migrant) reception" Meanwhile European Migration and Home Affairs Commissioner Dimitris Avramopoulos said the Aquarius case "is not just an Italian, Maltese or Spanish responsibility, it is a European responsibility and requires a European response". He said "the Aquarius incident shows that our work is not finished and it won't be over any time soon. We must be prepared, we can't afford to have a repeat of 2015, we need a joint structured approach, with solidarity and shared responsibility".
Avramopoulos said that it was not "a question of whether Italy's stance was legal or not, but if it is adequate and in line with European migratory policy." He said "we will not follow the path of those who say Italy's behaviour was illegal and I'm still waiting to see how the situation evolves".
Avramopoulos said the Aquarius case was "just an incident" and the EU thanked Italy for its migrant reception policy. "I won't play the blame game. A lot of attention has been given to the Aquarius case but that is just an incident, a case," he said. In these very hours "Italy is saving another 900 migrants and is maintaining its responsibilities," he said, referring to migrants rescued by Italian vessels. "I want to express gratitude for the Herculean efforts Italy has made in the last three years, for this it must be praised.
The Commission will continue to support Italy". Avramopoulos said that he was looking forward to working with Salvini. "I've had not yet made contact with Minister Salvini. I thought I'd meet him at the internal affairs council in Luxembourg, but he didn't come because he had a very important engagement in the Italian parliament," said Avramopoulos.
"I'm impatient to collaborate with him in the future and to meet him. "Minister Salvini has a very important brief and he won't just be someone the EU Commission will talk to, but he'll also be a partner in our efforts.
"We'll let him know this when we meet".
Avramopoulos said Brussels was proposing earmarking 34.9 billion euros in the 2021-27 EU budget for strengthening its external borders and managing migrant flows.
He said this was triple what is contained in the current budget, 13 billion euros. He said 21.3 of the 34.9 billion would go towards reinforcing borders and EU agencies, with 10,000 new Frontex agents, while 10.4 billion would go towards migrant management, and 40% of that sum allocated to repatriations.