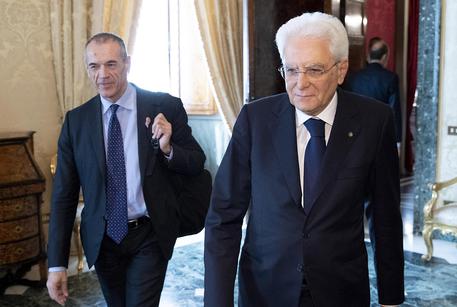 (ANSA) - Rome, May 30 - Premier designate Carlo Cottarelli met President Sergio Mattarella for informal talks on Wednesday, amid huge uncertainty about Italy's political situation and turbulence on the financial markets. Mattarella asked former spending review commissioner Cottarelli to try to form an interim, technocrat executive after attempts to put together a political government following the inconclusive March 4 election failed. The last attempt, based on a agreement between the League and the 5-Star Movement (M5S), broke down after Mattarella refused to approve the nomination of Euroskeptic economist Paolo Savona as economy minister. This prompted a furious reaction from League and the M5S, whose leader Luigi Di Maio called for Mattarella to be impeached Italy's bonds came under huge pressure on Monday and the international stock market suffered big losses amid fears that Italy could end up quitting the eurozone. Di Maio opened up to the possibility of reopening talks on a M5S-League government late on Monday, saying the M5S was willing to revise its positions and stating that the impeachment hypothesis was "no longer on the table".
Salvini, on the other hand, said Wednesday that Mattarella must set a date for new elections as soon as possible. "This is my appeal: Sergio Mattarella give us a date for the vote and the Italian people will do justice for what has happened," Salvini said in Pisa. Former IMF economist Cottarelli did not present his list of ministers on Monday as he needs more time to assess some issues linked to possible cabinet members, according to sources at Mattarella's office.