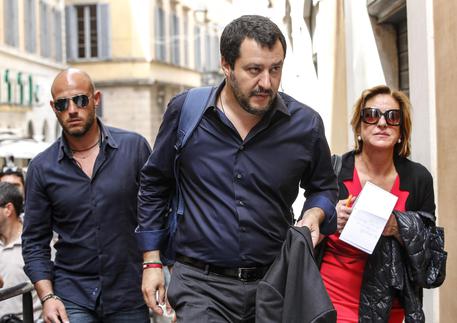 (ANSA) - Rome, May 28 - League leader Matteo Salvini said Monday that neither he nor the 5-Star Movement (M5S) contemplated Italy dropping the euro as its currency after the drive to form a coalition government collapsed following President Sergio Mattarella's refusal to approve the nomination of Euroskeptic economist Paolo Savona as economy minister.
"No one ever thought about quitting the euro," Salvini told Radio Capital.
"It wasn't in our programmes, it wasn't in Savona's programme.
"There was just the revision of the banking system and the taxes". Salvini said that the centre-right coalition will collapse if Silvio Berlusconi's Forza Italia backs an interim government led by former spending review chief Carlo Cottarelli. "If Berlusconi votes for Cottarelli then goodbye alliance," Salvini told Radio Capital. "His statement yesterday was the same (as former premier Matteo) Renzi of the PD".
Salvini told Radio Capital that he is evaluating teaming up M5S in possible new elections, and said "we'll see". "I would like to know what Berlusconi does," he said. Of Savona, Salvini said: "we've found a person who, if he wishes, could be with us" in a future government.