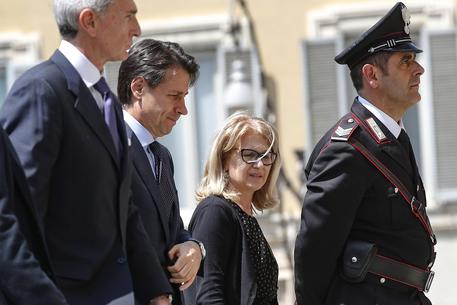 (ANSA) - Rome, May 25 - Premier-designate, Giuseppe Conte, continued to hold talks on Friday as he prepares a list of ministers for the 5-Star Movement (M5S), League coalition government he has been given a mandate to try to form.
Conte, a 54-year-old law professor from Puglia with no political experience, had a round of meetings with the parties in parliament on Thursday and he also talked to representatives of investors who lost money in a series of recent bank crises.
He met Bank of Italy Governor Ignazio Visco on Friday before talks with M5S leader Luigi Di Maio and League leader Matteo Salvini.
There appears to be tension between President Sergio Mattarella and the League-M5S over the cabinet, in particular the possibility that 82-year-old Euroskeptic economist Paolo Savona could become economy minister. Di Maio and Salvini seem intent on sticking by the choice of Savona despite reported misgivings on the part of Mattarella. It is a prerogative of the head of State to approve ministers, after discussions with the premier-designate. Sources at Mattarella's office said Thursday that the big issue on the formation of a new government was not supposed vetoes against some ministers but, on the contrary, possible diktats to the premier and the head of State on the exercise of the functions given to them by the Constitution. Conte said that he talked "about the state of the Italian economy" during a meeting with Visco.
He responded "we'll see" when reporters asked whether he would meet President Sergio Mattarella later on Friday.