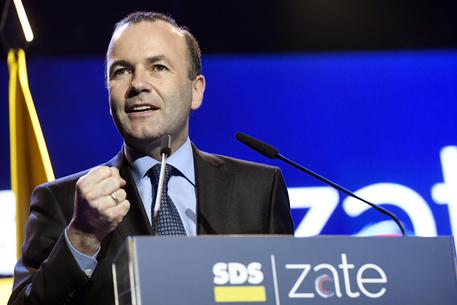 (ANSA) - Brussels, May 21 - European People's Party (EPP) leader Manfred Weber has reportedly said the 5-Star Movement and the League, who look set to form a coalition government in Italy, are taking huge risks with the policies they are proposing. "You are playing with fire because Italy is heavily indebted," Weber was quoted as saying by German media about a future M5S-League government. He reportedly said that "irrational or populist actions could cause a new eurozone crisis" and made "an appeal to stay within the confines of reason".
The anti-migrant Euroskeptic League immediately rejected Weber's contention and said he was the one playing with fire by continuing to try to assert alleged German hegemony. "The League-M5S government will act in the interests of the Italians, not that of the Germans!" said League EP Whip Mara Bizzotto.
"It's Weber who's playing with fire: the time when Italy took orders from Berlin is over".
Bizzotto said Weber "should mind his own bloody business, the Italians are tired of taking orders from Brussels and Berlin! "Let Weber put his mind at ease: the time when Merkel and her proconsuls in Brussels set up and knocked down Italian governments according to the interests of Germans and their banks is over".
League leader Matteo Salvini tweeted: "after the French, today is the turn of German threats: 'you're playing with fire because Italy is heavily indebted' says Manfred Weber, leader of the EPP...Let him think of Germany, and we'll think about the good of Italy!"