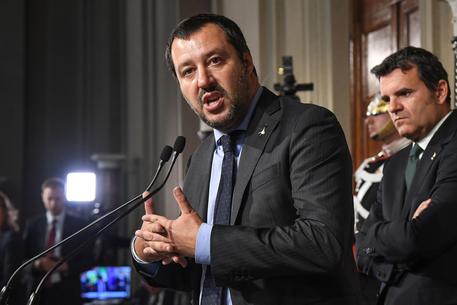 (ANSA) - Rome, May 15 - League leader Matteo Salvini on Tuesday accused the European Union of meddling after Migration and Home Affairs Commissioner Dimitris Avramopoulos said he hopes Italy's policy on asylum seekers does not change under the new government.
"From Europe we have the umpteenth unacceptable interference by unelected officials," Salvini said. "We have received and maintained too much. "Now is the time for legality, security and push-backs".
Avramopoulos said Italy deserved praise for the way it has addressed the Mediterranean migrant crisis while stressing that it was one of the countries to have received most support from Brussels. Italy, along with Greece, has taken the brunt of the Mediterranean migrant crisis and has been credited with saving Europe's honour for its efforts to save lives at sea. The flow of migrants from North Africa has fallen significantly after the outgoing government reached an agreement with Libya to support the efforts of its coast guard against human traffickers. Human rights groups have criticised this agreement, saying it means asylum seekers are being sent back to abuse and torture.
The League, which is in talks with the anti-establishment 5-Star Movement (M5S) on forming a new government in Rome, has called for the adoption of a harder line on migrants.