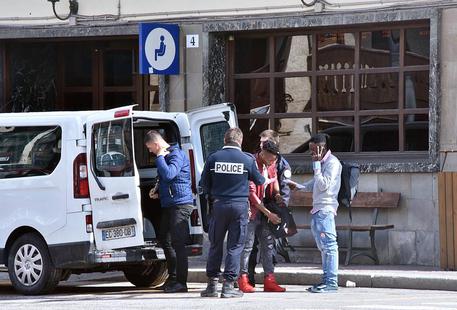 (ANSA) - Rome, April 3 - France has insisted there was "no violation" of Italian sovereignty when French customs police carried out a urine test on a Nigerian asylum seeker in the office of an Italian migrant NGO in the Italian city on the French border near Grenoble.
After Turin police opened a probe into the incident, which Italy protested, France said Sunday there was only a strict application of a 1990 accord which allows controls to be carried out on each side of the border.
Turin prosecutors on Tuesday began questioning witnesses to Friday night's incident.
The probe, at the moment against person or persons unknown, posits possible charges of abuse of office, private violence and violation of domicile, judicial sources stressed to Italian reporters.
Investigators are also weighing the offence of illegal search, sources said.
Prosecutor Armando Spataro is awaiting a more detailed report on what happened from the Turin police headquarters, local sources said.
The agents who carried out the raid have not been identified, sources said.
That operation can be immediately carried out if French authorities decide to collaborate, judicial sources told Italian reporters.
Otherwise, an international investigation warrant may be necessary, the sources said.
Meanwhile the NGO, Rainbow4Africa, said "the French should apologise to the Italians".
In France, government sources aid they owed no apology to the NGO because no rule or law was broken.
An internal probe has, however, been launched to weigh the conduct of the customs police, the sources said.
The premises used for the urine test have been used by French customs police two or three times a month, sources at the ministry of public action and accounts of minister Gerald Darmanin told reporters.
Giorgia Meloni, leader of the far-right nationalist Brothers of Italy (FdI) party, on Tuesday called on Premier Paolo Gentiloni to report to parliament on the incident.
"The country's role is at stake," said Meloni, a member of a centre-right alliance with the anti-migrant Euroskeptic League of Matteo Salvini and the centre-right Forza Italia (FI) of ex-premier Silvio Berlusconi.