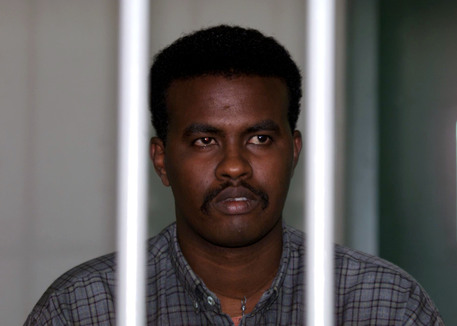 (ANSA) - Rome, March 30 - A Somali man wrongfully convicted in the Mogadishu murder of RAI reporter Ilaria Alpi and her cameraman Milan Hrovatin on Friday got three million euros in compensation for his almost 17 years in jail. Hashi Omar Hassan received 3.181 million euros in a ruling from the Perugia appeals court.
In October 2016 a Perugia court reversed the conviction of Hassan for the 1994 murder of Alpi and Hrovatin in the Somali capital.
Prosecutor Dario Razzi told the court Hassan "did not commit" the crime he served more than 16 years in jail for.
He was the only person convicted of the murders.
Alpi, 32, and Hrovatin, 45, were ambushed and shot in their jeep in Mogadishu by a seven-man commando on March 20, 1994.
Initially, it was thought that the journalist was murdered in revenge for clashes which had broken out between the militias of Somalia's warlords and Italian peacekeepers.
But a 1999 book by Alpi's parents called The Execution alleged that Alpi and Hrovatin were killed to stop them revealing what they knew about an international arms and toxic-waste ring implicating high-level political, military and economic figures in both countries.
The book accuses the Italian secret services of playing a major role in this ring.
In 2015 Ahmed Ali Rage, who was also known as Gelle and who was a key witness for the prosecution in the trial that led to the conviction, said that Hassan was "innocent".
Rage told a new trial that he "never told anyone" Hassan was part of the murder commando. Hassan was released into the custody of social services in 2015 with 10 years to go on his 26-year sentence.
"Thank God it's over," said Hassan at the time.
Alpi's mother Luciana, who backed Hassan's battle against the miscarriage of justice, said that she was "happy" Hassan had been cleared, but added that she was "bitter and depressed" that the real culprits had not been brought to justice.
"It's as if she and Miran Hrovatin died of the heat in Mogadishu," Luciana Alpi told ANSA. "We don't have the truth and I don't think we ever will".
Photos taken of the dead body of Alpi, who worked for public broadcaster RAI's third channel, and a medical report on the deaths, along with other key evidence including Alpi's notes, camera and video cassettes, mysteriously went missing on the journey back from Africa to Italy, fuelling suspicions of a cover-up.
Speaking to RAI Channel 3, Rage in February 2015 claimed that he was asked to testify against Hassan.
"I did not see who fired the shots," he reportedly told RAI 3.
According to the Italian diplomat who investigated the case in Somalia, former ambassador Giuseppe Cassini, the driver who acted as a key witness for the prosecution was "an unreliable individual who would do anything to survive".
Hassan, who travelled to Italy in 1998 to give evidence in a probe into brutality by Italian soldiers, was acquitted of involvement in the two murders at the end of a first trial in July 1999.
But he was found guilty by an appeals court in 2000 and sentenced to life in prison.
Italy's supreme Cassation Court upheld the guilty verdict in October 2001 but reduced the sentence from life to 26 years because it said the crimes were not premeditated.
Hassan's lawyers said he was not in Mogadishu at the time of the killing and was tricked into coming to Italy.
photo: Hassan in 1999