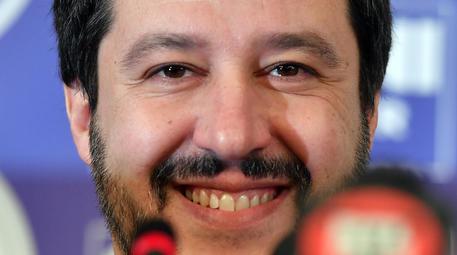 (ANSA) - Milan, March 5 - League leader Matteo Salvini on Monday hailed his anti-migrant and Euroskeptic party's getting almost 18% of the vote compared to 19% for the ruling centre-left Democratic Party (PD) of ex-premier Matteo Renzi and 14% for his own coalition partner Forza Italia (FI) led by three-time ex-premier and media magnate Silvio Berlusconi. "It's an extraordinary victory," said Salvini, which "fills us with pride, joy and responsibility". He said "I see it as a vote for the future, the Italians have rewarded the future".
Salvini added: "The team with whom you must talk and govern is the centre right.
"I'm someone who keeps his word and the commitment regards the centre right coalition, which has won and can govern".
The centre right came top among coalitions with 37% of the vote compared to the centre left's 24%, but fell short of winning a ruling majority.
Salvini is now the coalition's premier candidate with the League having outscored FI.
Salvini added: "I will remain a populist, those who listen to the people are doing their duty.
"Italians are fed up with radical chic".
The vote "punished the arrogance of Renzi and his people", Salvini said.
Salvini also rejected the idea of forming a coalition with the anti-establishment 5-Star Movement (M5S), which got 32%, saying "No to strange coalitions. No, no, no...".
He went on: "It will be President (Sergio Mattarella) who will choose the premier who has the numbers closes to reality".
His deal with Berlusconi, he recalled, meant that "the party that got one vote more than the other would have the honour and burden of meeting the challenge of bringing the country out of the quicksand".
"I have not heard from Berlusconi, I'll do it later, but deals between friends are clear," Salvini said.
"That's what we're going to do," he said referring to his installation as centre-right premier candidate.
Salvini said he could rule out broad "special-purpose, time-limited or institutional governments.
"We're not taking part in minestrone governments," he said.
Salvini said he hoped European Commission President Jean-Claude Juncker would remain at the EC helm for as short a time as possible. "I thank Juncker for the words he said in the election campaign (against populism), because the more he speaks the more votes we get. Let's hope he stays president of the European Commission fro the shortest time possible".
Financial markets have nothing to fear from the victory of the rightwing populist League, Salvini said.
"The markets have nothing to fear, on the contrary," said Salvini.
"Lower taxes and faster justice should stimulate investment," he said, adding that "Italians decide for Italy, not Berlin or the (bond) spread".