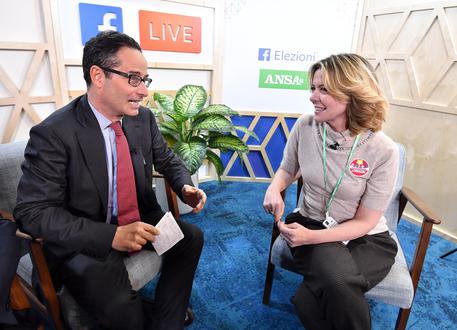 (ANSA) - Rome, February 19 - Popular Civic (CP) leader and Health Minister Beatrice Lorenzin told a Facebook-ANSA live forum Monday that her centre-left alliance, led by the Democratic Party (PD), would never govern with the centre right.
"Above all," she said, "there can be no possibility of ruling with" the anti-migrant and Euroskeptic League of Matteo Salvini.
"No, I made a rather clear choice five years ago when I left (ex-premier Silvio Berlusconi's Forza Italia) FI where I had campaigned since I was a girl, because it was no longer the same and the decision to bring down the Letta government would spell instability for the country. We were right," she said.
Lorenzin went on to say that "in my view Berlusconi's mistake was to back an electoral law that only rewards the League, and we can see the fruits" of that. She said "an electoral campaign appealing to gut instincts and anger and not based on love creates problems," she said.
Lorenzin went on to address a wide range of health and bioethical issues.
She stressed that there would be no change to the law on obligatory vaccinations for schoolchildren, saying that "we knew that there would be pressure from 'No Vax' lawyers, who are advisors to the M5S party, or actions like those of the Raggi (Rome municipal) administration to try to pressure the ministry to avoid the law. But there will be no change to it. In this country of ours, one side calls for legality and the other to circumvent it." "If you have not scheduled the vaccinations and you are not up to date with your vaccinations, you will not go to school. Of course this is not the case if it is a matter of health problems for the child or problems with the local health authority, if you have an appointment after March 10," she noted.
She lashed out at "social media disinformation campaigns against vaccines, This is a very serious matter. You must not be afraid of vaccines, and I say this both as minister and as a mother. They do not jeopardize children's health, while those saying the contrary instead do." On the issue of living wills, "I wasn't against them but I was puzzled by specific points. One was about the registrars, which we included in the budget law. There was also the point about managing resuscitation times, brought up by anesthesiologists. These issues have nothing to do with the will to determine one's own future." On the law on same-sex unions, "I voted for it and fully supported it. I was against the adoption of stepchildren, which is a window towards renting uteruses and is an abomination for women. Renting uteruses (surrogacy) is reducing women to an object and it raises concern for children who in turn become objects as well," she said. On sentences for drug-related crime, she said that "there is something that differentiates us from the PD: we must raise sentences for selling drugs. We cannot fight jail overcrowding by keeping pushers out of jail."